After a long day at class, the four of us hunkered down to some serious relaxing.  But before that, we took a little side trip to Kroger's so Sharon and Maggie could get a few supplies.  Liz and I decided to have a little treasure hunt. We noticed everyone of the employees were watching us when we could not stop laughing and were having too much fun playing with the wind up Easter toys.  Later at the house,  Liz's husband, Al, decided that we were "worthy" enough to have some of his Jamaican Cream Rum (which he bought in Jamaica where you could only buy this stuff).  Was this stuff ever good!  Then we got out the beads and kettle corn.  Sharon had to part with a few of her morsels of the sweet salty snack with Molly, Chloe, and Casey.  I think we were up until around 11pm just having the best time.
Posted by flyingbeader at 9:25 AM No comments:

And indeed it was a dazzling week filled with fun, instructions, food, and so much laughing.  I joined Great Lakes Beadworker's Guild in 2011, but was unable to make it up to the Detroit area for meetings or classes.  Now why would I want to join a Guild that was about 200 miles away from my home?  Because...as we use to tell our Mother when we wanted to do something really bad but didn't have any clue why.  That was until last week when I finally got to met many of these women who I have "met" through the Internet site and through the GLBG Facebook page.  Putting faces with names is always a treat, and let me tell you that each person wore an art gallery so it was so hard to not want to touch the necklaces, the bracelets, the earrings, or the purses.  I refrained somewhat.

I got there last Tuesday and stayed with Liz whom I met through Sharon (she moved to Tucson) who I met through Ohio Beaders way way way back.  Sharon & I figured out that we have known each other for 8 years.  Sharon's friend Maggie also joined us staying at Liz's home.  It was like a big slumber party every single night with beading, laughing, and playing with Liz's three fox terriers.  I even got to have a nice bed warmer as Molly was insistent that Sharon & I let her under the covers to sleep.


First day was with Nancy Cain.  The class was called three sisters.  I finished up my first crystal spacer using peyote and began to work on the chain which is peyote, herribone, and netting.  Nancy had the most amazing things for us to look at.  I bought two more instructions to try my hand at some of these pieces.  The only one that I know I cannot do is the dragonfly which I reluctantly did not buy

I WAS peyote challenged.  Notice I said was...until these four days of classes with first Nancy and then Met Innmon.  I can say that I am successfully a peyote graduate.

more later.
Posted by flyingbeader at 9:16 AM No comments:

Well, I'm up & half packed ready to head up North for 5 days of beading frenzy.  I joined Great Lakes Beadworkers' Guild last year, but with health issues around here & scheduling conflicts at work, I haven't been able to get up to the Detroit area for a meeting or classes.  But, I'm on my way now up to Bead Daze.  I'm taking 4 seed bead classes, two each with Nancy Cain & Met Immon.  I can't wait. They best part though is to get to met these women who've I've only corresponded with on Face Book.  I'm going to be staying with Bad Liz who I got to finally met & hang out with a few times when at Bead & Button show in Milwaukee last year.  As a surprise, our old friend Sharon is flying in from Tucson and her buddy Maggie is driving up from Northern Ohio.  It will be a full house, but it is going to be a blast.  Nothing like mixing laughter, wine, beads, Bailey's, a few dogs, and more smiles that imaginable.  Just wish that Liz had a bigger house so we could get some of you in there too.  I'm going to be taking pictures & if you follow me over at Facebook, check in as I hope to post them daily.

Posted by flyingbeader at 6:44 AM No comments:

Two weeks ago, I got two e-mails from Lark Books telling me that two of my submissions for the new 500 Beaded Jewelry book were accepted.  I was so thrilled. And later one when I went to Facebook and saw the names of the others who were going to be published in this book, I about fainted.  To be with such talented people is just a mind blower for me.  My goal last year was to make jewelry done well enough to be published, and now to have not one but two of my creations.  The bracelet was from a challenge I had with Cynthia.  She had all these insect cabs that she'd gotten when in Arizona, and I found a dealer here at the Ohio State Fair.  I made Garden Buzz with the resin June bug cab and a piece of dyed pig leather.  I think I got the insect wings from Mary Tafoya off her Etsy sight.

The necklace was actually one that I had originally made as a big collar necklace, but it just didn't hang right on me, so I tore it all apart and made Napali Mist from the bits and pieces of the big collar.  I loved all the sequins that I got from Byzantium's close out sell, and the beaded lizard was from an article in Jill Oxton's Cross Stitch and Beading magazine.  The colors are what I brought back from our Kauai trip in 2010.

I saw that the 500 Beaded Jewelry is available from Amazon at a discount of less than $17, and several wrote on their FB page that it is already the number one beading book.  It is not even available until August of this year.  Wow! 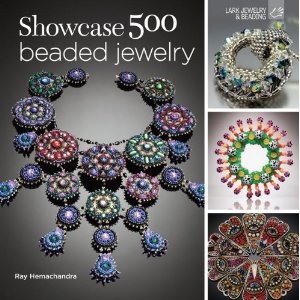 I'm working on a few items before I head up to the Detroit area to take classes with the Great Lakes Beadworker's Guild.  One of the members had some vintage glass cabs.  I finished up three...yes!  I said THREE pieces for this event called Light it Blue: Michigan.  I completed a necklace, brooch, and bracelet to hand over to Dina to be auctioned off to light up the Mackinac Bridge:

For the entire month of April, Corner Pieces intends to light the Mackinac Bridge blue in recognition of autism awareness.

I have to get the light box out to take pictures as there is far too much glare using the camera on my iPhone.  So check out later next week for this and possibly pictures of the great time I'm going to have meeting up with old friends (Sharon & Liz) and meeting members of this great Guild that I've only "talked" with on line.
Posted by flyingbeader at 4:36 PM 3 comments:

WOW is about all I can say.  Yesterday, I got a package from Land of Odds from my winning piece Black Notice in the Illustrative Bead Tapestry contest.  I had the best time last week sitting here in front of my computer screen putting whatever my heart desired in the "CART" at their fantastic website.  I didn't even look at prices!  I just said to myself..."I want this, I want that, wait...I'll take two".  It was so fun. Chris did tell me that I should save a little of the prize shopping spree for future projects, so I did cut back a little bit.  Well, the package arrived yesterday.  Weee..... 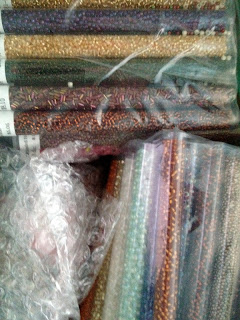 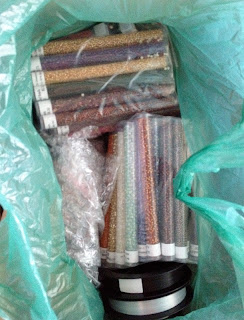 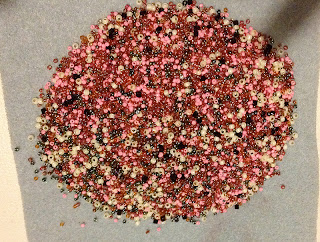 Here are a few sneak shots of what was in the package as I opened it.  Now eight of the tubes came open upon shipping, so I had a real bead soup surprise in two of the bags. As nice as the bead soup looked, I couldn't not let it stay that way.  So after 6 hours of sorting, I have everything back in their tubes waiting for me to take more pictures & share more of the fun I am having.

Took the girls to the Vet yesterday.  Fiona's Hemoglobin A1C is a little high, but if I vary her insulin too much, I observe that she is more comfortable with the higher dose per day.  I guess I need to make sure she doesn't push her way into Arwen & Frodo's bowls.  Arwen is doing okay.  Four months now since her bladder cancer diagnosis.  After discussing a few concerns with Dr. Miller, we decided to have her on a daily course of antibiotics and reevaluate in a month.  She's still a very happy dog.  If you didn't know she had cancer, you would never realize it by how she acts every single day. 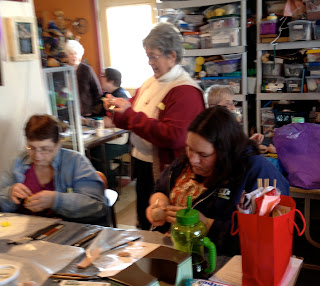 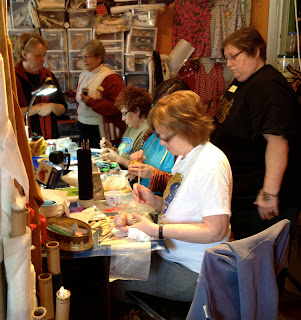 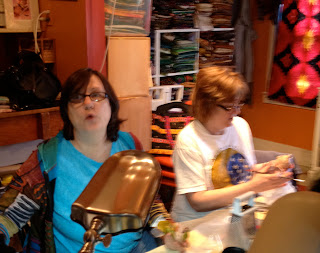 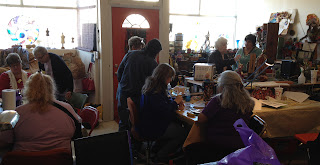 Posted by flyingbeader at 2:20 PM No comments: