On August 29th, Mr. Frodo lost his battle with a tick borne infection and passed away early in the morning.

Frodo was born in this very house nine years ago.  He was the second puppy that Fiona delivered.  As soon as Chris held Frodo in his hand watching him take his first breath, he knew he wanted to keep Frodo.  At that time we named all of Fiona's boys from characters in Tolkien's Lord of the Rings which is our favorite movies.  Frodo kept that name from second one.  We occasionally called him Fro or FroFro, or Mr. Frodo as terms of endearment.  He was the most loving Scottie boy.  When he was a puppy, he was a little terror making sure we had not one fringe left on any rug.  And once he even ate a hole in a wool rug in the middle of the bedroom when I gave up trying to chase him from under the bed and left him out when I was sleeping.  He was best friends with his litter mate, Andy, and when 15 weeks old and in obedience training, they boys would actually gang up on other poor dogs twice their size for a rollicking good time.  And both were given time out!

Frodo loved his backyard, and always protected us from bunnies.  Unfortunately, those rabbits would live in the evergreen trees on our back lot which was an irritation to Frodo.  He chewed out a big hole in the wooden fence once just so he could stick his head through to bark them away.  He loved Arwen when we brought her home, and would play catch me with her all the time.  When we got laminate floors, he thought it such a fun game to race around the coffee table with his big red stuff dog in his mouth which was almost as large as him.  And Frodo loved women.  There are not a woman that dog didn't fall in love with.  His favorite was hair.  My sister Cheryl had long hair and Frodo would just rub all in her hair sniffing it with pure pleasure.

Frodo also loved walking the neighborhood.  He would dance with joy when he's hear us take the leashes off the hook.  He would prance and pull, and if one of the girls got even one inch ahead of him while walking, he'd pull until he was first.  He always wanted to be the lead dog.


He was a brindle coated Scottie.  His coloring was so unique with the reds and blonde of Fiona mixed with the black of his father Anthony (a Wildwind Scottie).  I would let him grow out and so when he was groomed we'd always admire his brindle coat.  He had a swatch of brown next to his right eye which gave him a very distinguished look.  And when he was young, he had a Bardene white ring around his tale.  He began to get more gray in his beard this year, but that never stopped this high energy dog.  He wasn't afraid of anything! 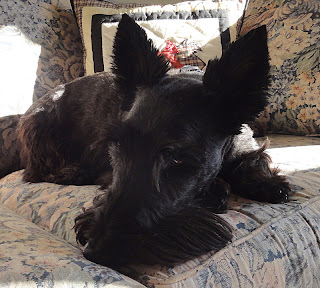 The day my Grandma died, he began to limp.  My Vet thought he'd just pulled a muscle as he always ran with his heart out front.  Then last Sunday, he became lethargic and stopped eating. Last Tuesday, we took him back and my Vet was very puzzled with the symptoms.  She then put it together that he had probably been bit by a tick that had Ehrlichiosis.  And indeed he had as the tick lab test came back positive.  Frodo had a low white count from birth, so his immune system did not have the strength to fight off the infection.  After two more visits to the Vet and adding steroids to his medication, he was doing a little better Tuesday night.  Chris took him for a walk out in the field behind our house.  Frodo was too weak to walk down to the bridge where he loved looking at all the frogs and birds.  I got home and spoon fed him half a can of Pedigree.  He fell asleep in his crate.  The next morning, I found him gone.  The girls were in the chair watching as I sat and cried for my boy.  Both Chris and I were just beyond as even though we knew he was seriously ill, we so thought he'd make it. But alas, FalaPink and SkyeBlue must have decided they wanted him to join them in a rollicking game of chase on the other side of the Rainbow Bridge.

Today I have a beautiful wooden box with Frodo's ashes.  Pet Cremations picked him up yesterday here at home, and then today brought him back.  I have been so blessed to have so many people write to me personally and on Facebook.  So many of us have had to be in this place.  It is a contract we make to that sweet adorable puppy face licking our cheeks.  We love them throughout life, and we care for them when they are sick and elderly.

We miss our boy.  The box with is ashes are on the fireplace mantel over top his couch that he loved to dearly.  Good bye our boy...we miss you so much.
Posted by flyingbeader at 12:37 PM 11 comments: Links to this post

Today is the 3rd reveal for Lori Anderson's Bead Soup Blog Party.  I had two partners for the 6th event.  My original partner is Geneva Collins.  Here is the link to her blog.  She and are are both seed bead addicts so we were both very excited about being partnered with another person who enjoys bead weaving.  Geneva sent me such an abundance of pieces to work with. As with the rules, she sent me a gorgeous metal flower and a beautiful clasp.  She actually sent me two color pathways letting me decide which one would work for me. 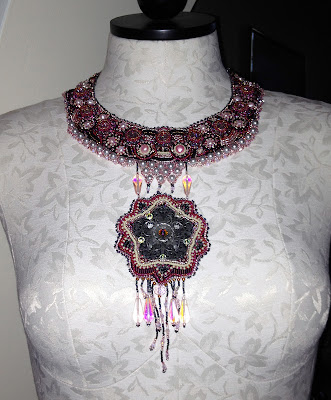 I wanted to make another collar with these lovely beads Geneva sent me.  I started by sewing down the metallic flower onto Nicole Bead Backing.  I wanted to make this into a two component piece so I spent the beginning working on the flower as a pendent focal with the crystals sent to me.  I also loved the crystal tear drops and used them as part of the fringe.  For the collar, I started with a very simple neck collar once again using black Nicole's Bead Backing.  I used the glass beads from the bead soup mix and added pink pearls.  Up to this point, this all looked very Victorian to me using the gunmetal and pink colors.  I was working on the actually collar part when my husband began to play a Beatle album.  I started to hum along while looking at the bags of beads in my soup.  Once package label caught my eye being size 8 seed bead strawberry mix, and then I realized I was humming Strawberry Fields Forever.  Every have a click moment when you just know what you want to name something?  I usually have such a difficult time naming things so I was a little put back that this came so easy.  Maybe I should start listening to old music when I'm beading.  Wonder how Pink Floyd will impact my designs.  I'm smiling right now just thinking of the line "shine on your crazy diamond".  Hummm...maybe the focus of my next experiment?


If you look at the above photo you'll notice that after I joined the two components together, I finished off the pearl scallop look and added pearl dangles joining them to the middle of the metallic flower focal pendent.

Now please join with me with me and take time to whirl around the world visiting the blogs of the other artist in the third reveal of the 6th Bead Soup Blog Party.  You'll probably need some a loaf of bread and a drink as all this traveling and looking at delicious Bead soups are going to make you hungry

Posted by flyingbeader at 12:30 AM 62 comments: Links to this post

Awake in the Dragon's Lair

Thank you to everyone who wrote to me about my Grandma's passing.  She indeed as someone special in my life.  She always encouraged me to learn, learn, and learn more.  I've taken that to heart especially since I've started to get back into making jewelry after these past years.  I've become enchanted with the big bead embroidery collars after reviewing Sherry Serafini & Jamie Cloud Eakin's books.  I've tried a couple times to make big collars, but never have been pleased.  I believe that the key to success is practice over and over again. And boy have I ever been doing that. 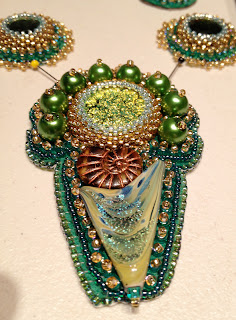 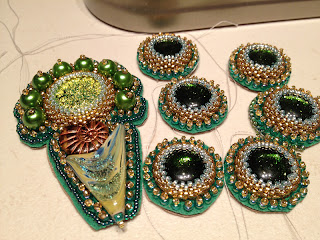 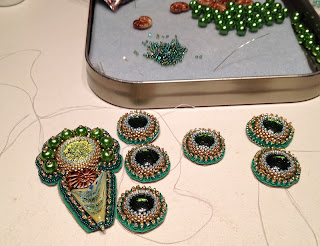 This time I decided to do a piece that used multiple component pieces.  I started with black Nicole's Bead Backing, a few cabs from my Synergy partner Cyndy Goshman, and a few odds and ends just sitting on my work desk waiting for me to pick them up and put them to good use.  I really love the colors of this necklace.  To begin, I called it Emerald Tides, but as I began to construct the necklace and thinking of my Grandmother's up coming funeral, I looked at the middle focal piece and it blinked and told me it was the Dragon's eye watching me.  The Dragon is not my Grandma if you are wondering.  Far from it. I was dreading walking into the funeral home and being confronted by various relations who for some reason or another were wanting to cause trouble.  Oh yes, we all have those in our families, don't we?  I got to thinking that I was the Dragon, and I was aware of possible outcomes.  I wore it when completed thinking that oh yes...you might think you are all clever with your little games of manipulation, but this Dragon is awake and you are walking into my Lair.  I know who you are.  I know what you've done.  I know what you can do.  I'm watching you.  I will always keep my eyes open, aware. 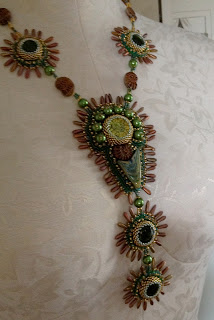 Posted by flyingbeader at 8:05 PM 2 comments: Links to this post