It has been a long time since I worked on a beaded doll project that was bigger than my palm.  I was cleaning up the studio after Fiona passed away and found several UFO projects in a box that I'd put away not being happy with the progress.  The project was a big beaded dragonfly where I'd started with a peyote tail and netted body.  It just went no where for me.  I loved the head and the eyes of the dragonfly, but it was just stagnate.  I actually ripped it all out and pooled the turquoise colored beads in a pile.  I wanted to use these beads but first off, I did not have enough of this one color to complete the project and second it just looked too stale.  So I grabbed some browns, blacks, and greens to use to work on the dragonfly.  Dragonflies are different colored dependent on locale.  In my garden in Central Ohio, the dragonfly is a more iridescent greenish/blue insect.  Meanwhile, on a trip through the Grand Canyon in Arizona, I saw reddish/brown dragonflies.  I'm sure there are different colors other places in this world.  I've borrowed this picture of a dragonfly from a blog to show you what colors I've chosen, but go to this link to see what I mean by other colors. 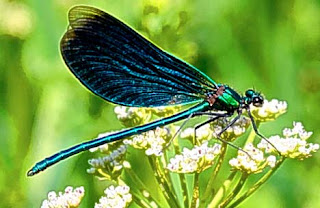 I also looked up and saw a little jointed doll I'd made a year ago when experimenting with gluing fabric onto resin faces.  I'd actually taken the cloth overlay off this resin face, and liked the impression it had made on the cloth.  I made a cute little doll with yarn hair and socks for clothing, but was never really happy so I never finished her.  So I took her down and after a little posing realized, realized she'd fit very well onto the back of the dragonfly.  So I stripped her of the yarn and socks and took her apart as I wanted to position the legs so she'd be able to mount the dragonfly.  With a little stitching here and there, I was able to get her to look as if she was ready to go to battle on the back of her mount.  I wanted her to not be so flat looking so I decided to make her a little more feminine looking by giving her breast.  I had a candy jar filled with different colored felted balls, so with a pair of shears and more sewing I gave her a pleasing form.  Then the beading began on her.  It is coming along very well, and I thought I'd give you a little preview of the project. 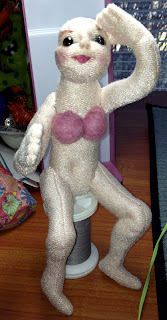 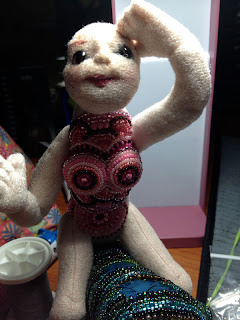 I still have more of the body to complete and try to decide what type of wings I want to make for the dragonfly.  I've thought of wings made of chiffon, or liquid poly clay, or
Angelina film.  Still all undecided, but I'm closing in on finishing.  For the doll's hair, I've found some mat silver I was going to use but not sure still if she's to have curly or looping hair.  Experimenting still going on.

And if you wonder, yes I love watching British dramas on NetFlix while beading.  I've been watching Foyle's War while working on this project.
Posted by flyingbeader at 10:26 AM 3 comments: Links to this post

I had several websites.  The very first one was called Scottie Obsession.  It was all about naturally our Scottie dog FalaPink and then SkyeBlue.  This was long ago when the Internet was new and people started reaching out and sharing their lives with others around the world.  Back then it www was referred to as the Wild Wide West...and wasn't it a fun time.  I met so many people with Scottie Obsession and have reconnected with many of them now on Facebook.  I also had a website where I shared my bead accomplishments and projects.  I found it too difficult to keep a website up to date when I found blogger and then the great time consuming Facebook.  But I realized that some of my older pieces that are still viewable on the web, I haven't shared here on my blog.  So, I'm going back in time to show a few of these beaded pieces that I still own and still enjoy seeing every day in my house. 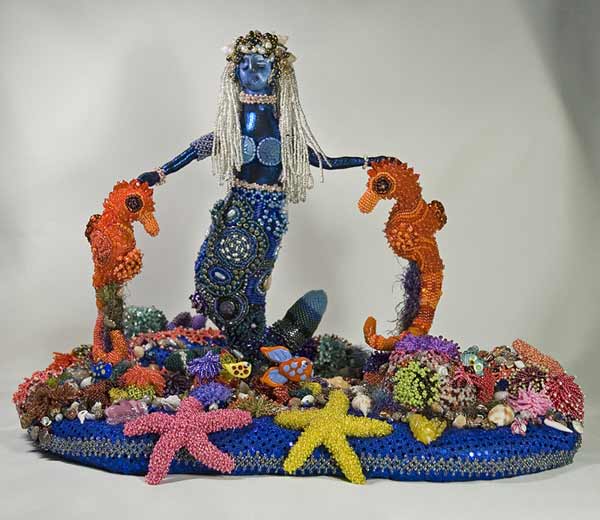 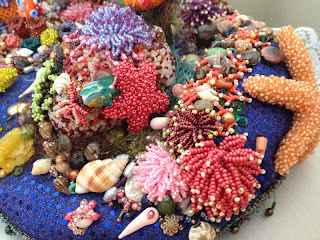 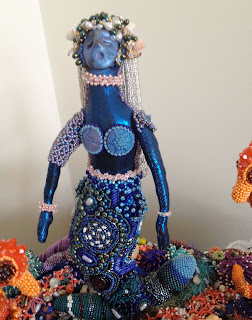 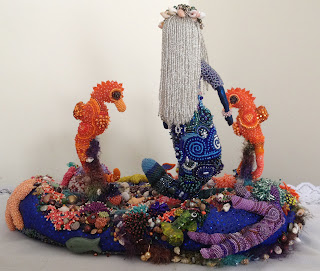 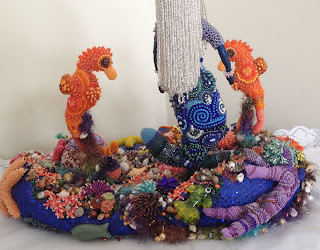 First off is Fantasy Swim.  I made this assemblage back in 2005 after attending my first Artistic Figures in Cloth here in Columbus Ohio.  I worked on it diligently as I wanted to enter it in the show Bead International 2006 at the Dairy Barn in Athens Ohio.  I was so excited when I found out that Fantasy Swim had been accepted for this exhibit.  After spending time at the Diary Barn with other spectacular pieces, it traveled around from gallery to gallery on display for almost 18 months.  When I got it back, I looked at the piece and saw how my beading skills had changed.  But I still delight to see Fantasy Swim each day when I walk down into the front room and watch the Sun light play with the beads and fabric. 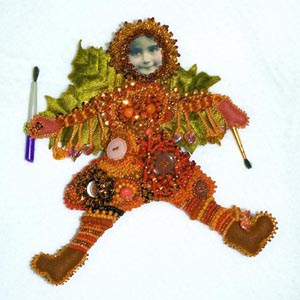 The next piece I'd like to share with you is very special to me.  The doll may be small, but she is by far one of the most prized dolls I own.  The pattern originally was by Cyndy Sieving of Cyndy's Dolls and the owner of AFIC&C.  The pattern was in the magazine Doll Crafter & Costuming as a challenge and contest.  I changed the pattern a little bit and created Sparkle.  I love the whimsical nature of this doll. Chris made the fabric faces, and I actually broke two paint brushes to make it look as if she were painting leaves in the Fall.  When Lark Craft put out an announcement looking for handmade dolls, Cyndy once again challenged me to send it a picture of Sparkle.  I don't know who was excited more when I found out that little Sparkle was going to be in the Lark 500 Series.  But then was I every surprised when I got a message from a fellow doll artist who got the book before I did that not only was Sparkle in the book, but Sparkle was on the back cover.  I've been asked if I'd sell Sparkle, and I always have to answer that Sparkle will ALWAYS live with me.  She shows me that even the smallest can be the most spectacular. 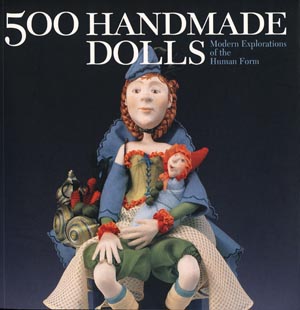 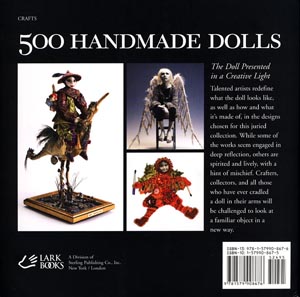 I hope you've enjoyed my little journey down Beadie memory lane.
Posted by flyingbeader at 9:52 AM 4 comments: Links to this post

It has been over a week now since Fiona passed away.  I still miss her every day & find myself listening for her or the other two.  I know that someday we'll have a new puppy to share our lives with us.

I had been working on this necklace while tending to Fiona when she was ill.  Originally, I was going to call this piece Moonglow.  My friend Cyndy up in Michigan sent me some glass she'd made for my jewelry making.   I glued it down onto a piece of blue Nicole's Bead Backing everything popped out.  Then I chose Rose Opal size 8 seed beads I'd gotten from Out on a Whim along with Topaz lined size 11 seed beads.  I did right angle weave cage technique I've taught myself, and then used some of the new Rizo beads from Out on a Whim.  The middle piece made me very happy, so when I decided to take crystals and make individual blooms using the same technique it was a challenge to puzzle all the pieces together to make a necklace. 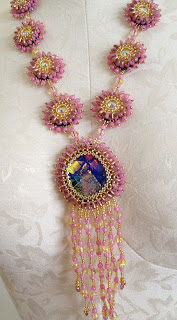 I didn't finish the necklace until last weekend.  Fiona had died by then, and I was going through intense mourning for her.  I put the necklace around my neck on Sunday and felt a sense of calm for the first time in days.  I stroked the blossoms of the necklace and could almost hear a sigh.  Then it dawned on me why I felt so comforted.  I don't know if many people know but Fiona's full registered name is Fiona Rose Blossom.  I realized then then that this necklace was for my Fi.  Whenever I see it or wear it, I'll always remember my gentle old girl who was blessed with an old soul out of the most beautiful canine eyes ever.  I'll never sell this necklace just as I'd never sell the one I made when my SkyeBlue died.  Both necklaces were made at a time when my grief was unbearable, but once completed I had a sense of absolute calm. 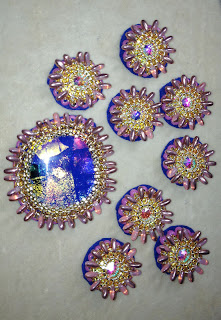 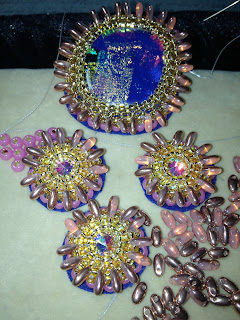 I still have tears for our three Scotties who've died withing the past month.  I made this necklace called Dorothy's Tear to remind me my love for all three.  We have three boxes of ash on our fireplace hearth.  Each morning when I wake up, I crease each box and say good morning to Fiona, to Frodo, and to Arwen.  Sometimes a tear will glide down my cheek, but more often I'll have a smile remembering my three terrier guardians.  I miss them always. 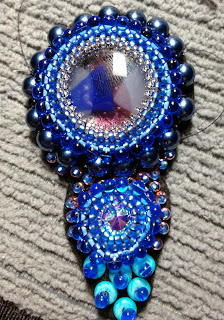 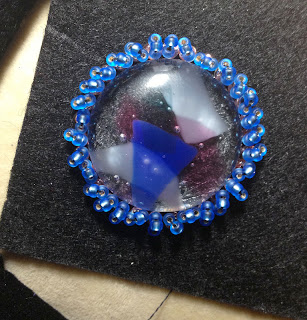 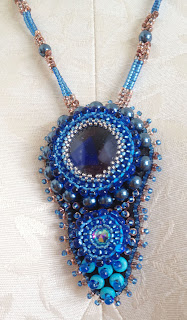 Posted by flyingbeader at 3:39 PM 6 comments: Links to this post