One Month with our Sammy

Today we've had Sammy for a whole month. Can't believe in just this short amount of time, he's just settled into our routine and taken over a big chunk of our hearts.  He is probably one of the sweetest Scottie boys I've ever met.  Such a loving little personality that only wants to please.  We've laughed more and actually feel lighter in our souls thanks to this 18.7 pounds of joy.

Posted by flyingbeader at 7:47 PM 3 comments: Links to this post

Wishing upon a Star

Next month most of my friends are going to be traveling near and far to spend a wonderful time in Milwaukee at the Bead and Button show.  ME?  Can't go, but so wish I could as I would love to have been able to take the Master Class with Marcia DeCoster.  I think I've probably taken more bead classes with Marcia than anyone else, and since Liz is going to be her assistant there I just KNOW they are going to have a blast.  I don't have the vacation time since I've started my new job, and it is a little late to try to get into the second Master class with Marcia.  So instead of just pouting, I've been doing my own home version of Marcia's Master class using components.

Early I had shown how using the totally unappreciated Czech seed beads, you could do some marvelous bead weaving.  So I've taken that one step farther.  First off, I've finished my version of Marcia's Pacific Morning Glories using Czech beads for a necklace.  Then I decided to take one of my own bead embroidery components and add it to several of the components from Pacific Morning Glories and another of Marcia's designs from her book Beaded Opulence.  Can I add one more thing?  I can't wait for her new book to come out in August.  It is all about Motion! 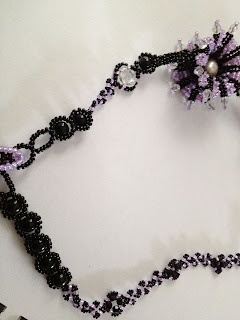 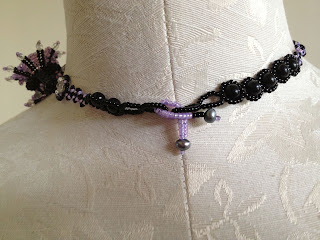 It has been almost 10 days now since Artistic Figures in Cloth and Clay has ended, and I still haven't had a chance to download pictures or unpack the sewing machine.  I always have such a fun time at AFICC and since it is only once every two years, getting to spend time with old friends and making new ones is a highlight of the year.  Cyndy Sieving does such a wonderful job making everyone comfortable and having loads of fun.

This year I got to spend two days with one of my favorite teachers and friends Ute Vasnia.  Two years ago while taking a class with her up in Akron with Time for Dolls, she showed us Stanley her naughty troll, and we all begged her to come up with a class.  She did.  I jumped for joy.  I signed up for the class.  I got to make my own Stanley.  I got to spend two fabulous days laughing and creating.

I should warn you though that Stanely should not be pinned to Pinterest. They have a policy about nudity even if it is an art doll.  So Please don't pin any of these pictures as I really don't want to get you into trouble.


Posted by flyingbeader at 7:31 PM No comments: Links to this post