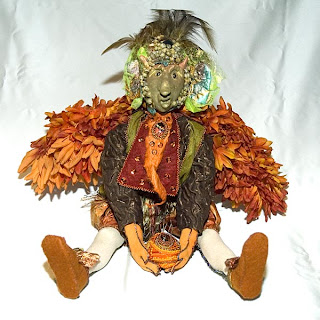 I have been wanting to finish this doll since I left Albuquerque in July. He is from a class I took at EDAC. He originally was suppose to be a character from Viva L'Carnivale series, but I just couldn't seem to find that in this doll. So instead, he's turned into a fallen angel. I've named him Azhruhl the keeper of the Last Dragon's Eye. The Dragon's Eye has magical powers which if lost or fallen into the wrong hands could harm the world of Ohz.

I had a tough time finding a name. I searched several sites on the internet looking for angel names. I wanted to call him a name with an A & Z, but most of them were truly evil. I don't want this character to be evil or cause damage to the world as he's a keeper. So I invented this name. I use to take my Thunderbird to a dealership here in Columbus called Dick Ruhl. I loved that place. Everyone was so pleasant & they treated me like a princess even sometimes taking me out to breakfast when I waited for work done on my card. Then the dealership was sold. Things changed. I stopped going there when all the people in the shop were replaced. Oh, and I bought a Honda as my main vehicle. Still have the T-bird, but he now gets service other places.

Hope you like him. He has fall colors which are my favorite. Loved making the wings they were from a class I took with Adele.

dot
Posted by flyingbeader at 7:48 PM 6 comments: Links to this post