I'd like to introduce you to our newest member of the family: 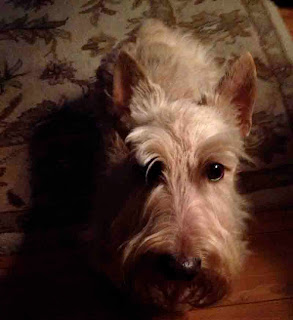 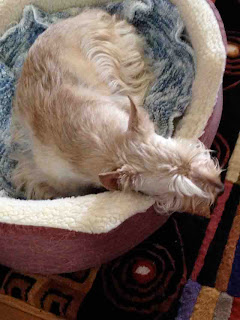 Posted by flyingbeader at 4:28 PM No comments:

I guess my subject line just sort of shout outs what I've been thinking these past few days after seeing a few comments on Facebook about the woe of having Czech seed beads.  I had to stop and give that some thought.  Do they get used as much as Japanese seed beads?  I guess I'd have to say no, they are not as desirable in the bead weaving community as their counterparts, but they do have a place in our bead world. 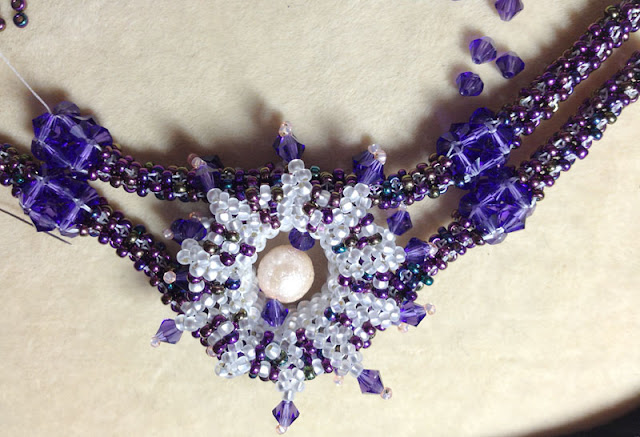 When I first started beading years ago, my favorite bead store had one of the largest selection of Czech seed beads in sizes from 6 to 11s.  I'd stand in front of the way where there were so many different colors "winking" back at me.  I used them in every class I took at Byzantium and incorporated them into my beaded dolls are landscapes as much as I could.  They worked so well by actually not being uniform in size.  You could always cull through the piles of beads and find that one perfect size that would fit nicely into a tight spot completing the row and making the piece look almost flawless.  Then most of the time when doing other types of bead weaving techniques the Delicas were always the bead of choice with their square uniform size that just "snapped" into place making a smooth flawless transition in color and texture.  But they were expensive to use and no one at the time used them except to do peyote caged cabochons.  Then our local bead stores started carrying more and more Japanese seed beads in 11s, 15s, and 8s.  The color selection wasn't that impressive, but they did work better in Right Angle Weave and Netting.  They still were a little wonky with Square Stitch or loom work, but they were very versatile in bead embroidery.  As more an more colors hit the market, bead stores eventually displayed them in a more pronounced area of the store.  Meanwhile the lowly Czech seed beads found themselves in the least desirable portion of the store either next to the rest rooms or in some dark corner.  It became even harder to find them online.  Once I heard a student say they had to buy their Czech beads online for their Native bead work because none of the stores in town carried little more than a handful of colors.  I looked, and it was true. 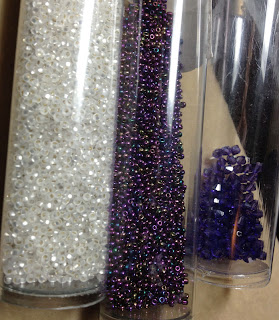 Eventually, even myself turned from my Czech beads.  I still have a large collection of them when I "rescued" them from the two closing bead stores in town or purchased from another beader who just didn't want them any more.  They became less and less a part of my palette while doing any type of beading.  So when I read that comment about them, I thought to myself are they such bad beads?  Are they really just "trash" to be discarded in yard sales and donated to the local thrift stores?

So I decided to pull out my stash of Czech seed beads and see if I could reconnect with them and try to show them that they are more than just fillers for those unseen spots on a bead embroidered piece.  I decided to use them in a project from Marcia DeCoster's Beading By the Bay class called Pacific Morning Glories.  I loved the pinwheel design where you can have this amazing piece twirl with the ability of motion.  I got out two different color size 11 Czech seed beads from my storage in the studio and began to construct the pinwheels.  They might not be as lovely as the ones I made with the Japanese beads while in Marcia's class, but they do have this earthy feel and hominess visual appeal.  Not even culling out the imperfection from the piles of beads, I think they look rather lovely.  I intend to experiment more by creating a necklace with this design using ONLY the Czech seed beads and some of the "rescued" crystals I also found hidden in a box of unlabeled offerings from a closing bead store.

So come on bead world...let's show the Czech seed beads a little more respect.
Posted by flyingbeader at 7:22 PM 4 comments: