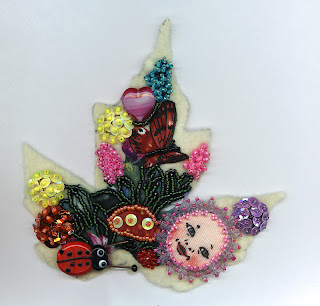 I'm ahead of schedule for my Feb Bead Journal Project! I actually had it all beaded and finished before Valentine's Day, but I wanted to add the lady bug bead, and had to hunt through draws looking for it. Now to explain why it is all flowery & Spring looking when the weather in Central Ohio has been snowy, icy, gloomy, and WET! I was working on the squares for Monica Magness' project Pink Artist (click on the button to check out what this is & see Monica's progress). I made one which was hoo hum to me with the button discover on it, when I looked over at a stack of fabric scraps and saw a piece of last year's Huffman Challenge. Now, I didn't do a Huffman Challenge doll as my pattern making is still on the beginner's level. But it was pretty & I though what a nice addition to the new faces that Chris has been making for me. So I made three squares (see blog entry below), and I really loved doing them so I thought why not! Why not make my Feb BJP dedicated to Pink Artist and the cure for breast cancer.

Twelve years ago, I met a wonderful person on line named Marlene. Marlene & I talked about going to a Scottie Dog Antique Convention in Cincinatti called Wee Scots. We met & really liked each other immediately. We hung out to together the whole 3 days & thought Marlene lived in Los Angeles, we stayed in contact via the Internet. At that time she was traveling all over the US taking pictures of Water Tanks. We laughed about that, but she did have some great pictures. She drove all the way to NYC, up to Canada before heading back home to LA. When she got back, I helped her get over her grief of losing her aging Scottie & enjoyed her delight in getting a new puppy. All this time, Marlene had a secret. Marlene was in remission from breast/lung cancer. The trip where we met was a goal that she made to herself after she completed chemotherapy. Marlene's remission was only for 2 years. Those two years that I got to know her. Her cancer came back. I called her every week. I always tried to make her laugh as much as possible telling her stories about my Skyelini. I sent her funny little presents & tried to make sure I called her when she was suppose to get them. Marlene's cancer spread fast, and my dear friend did not respond to the current chemo therapy. I knew she was dying. I was heart broken to lose a friend so young as Marlene was only 50 year young. She was in the hospital unable to eat due to the blisters in her mouth. She was weak, but she was happy as her nephew was getting married the next day & her doctors said she could go to the ceremony. I called the hospital, and we talked for only a few moments. Her voice was little more than a whisper. I told her a story about Skye flying over the rugs & she laughed calling her the flying Scottie. Then she told me something I won't forget. She told me being her friend was such a relief for her and that she was happy we met on the Internet. She died a few days latter. The day her sister called & told me she'd died, I hugged poor little Skye so much. I couldn't hug my dear friend, so Skye was the substitute. So my Feb BJP is dedicated to that first friend I found on the Internet. This is for Marlene.
Posted by flyingbeader at 4:03 PM 12 comments: Links to this post 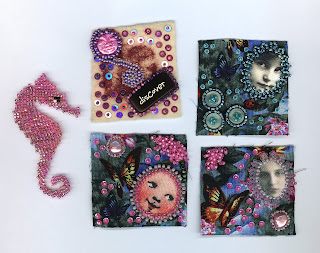 I sent out my 2 squares to Monica yesterday. They were made for the Pink Artist doll that she is working on. Click on the Pink Artist icon to find out more about this wonderful project & the great artist behind it all. I've known Monica for awhile. I believe it was @ 3 years ago that she was my Fairy Bead Sister from Bead Art. I tried to spoil her so bad with small gifts. She was fun to surprise. I even joined ArtDollz on Yahoo Groups to taunt her. I liked ArtDollz, so much that I stayed there. I lurk, but I enjoy looking at all the wonderful dolls on the site.

I'm still working on the Photo Album cuff designs. There are still a few small snags, but they are coming along. I've been hired to teach them at a retreat in October & I'm going to start trying to market the class to other groups later on. They are really fun to make. Whenever I wear the one of my three Scotties, people do notice them.

I started a new doll for a class proposal for AFIC. She is Mae Flowers. So I'm busy when not doing everything else I'm suppose to be doing in practicing herringbone flowers. I'm really crazy.
Posted by flyingbeader at 7:10 PM 4 comments: Links to this post 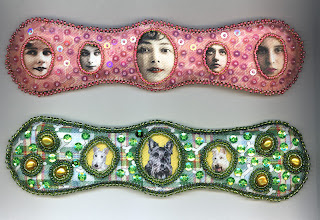 Well, I've been obsessed with doing more cuff bracelets. I've trying to develop a new idea using Chris' talents at the computer with my talents of beading. Here's what we've come up with to begin. It still needs to be worked on a little bit, but I'm happy with it so far. I wore my bracelet with the dogs on it to work & immediately one of the gals saw it & wants me to make one with her kids pictures on it. I can see pictures of kids, grandchildren, dogs, cats & yes! one guy asked me if I could put pictures of his wife's favorite car on it. Sure...but I asked them to pleas let me experiment a little bit more. I'm hoping to teach this technique at the Ohio Beader's Retreat in October. I asked Cyndy S. if AFIC would be interested & she said since it was jewelry they wouldn't. I was a tad bit disappointed in that as I think this would be a great project to teach beginning beaders & they'd get something personal & custom to make & take home with them. But, I do see her point. The conference is aimed for doll making & not jewelry making. I only have until the last of this month to come up with doll proposals. I have several things in mind, but jewelry making it obsessing me. I guess that is normal.
Posted by flyingbeader at 9:45 AM 8 comments: Links to this post

Earrings on my mind 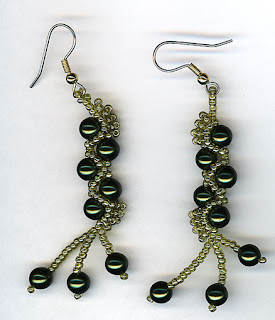 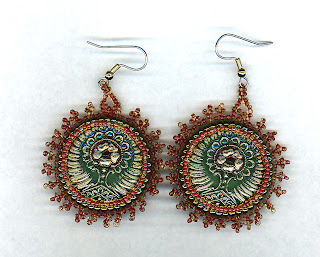 I have tons of projects to complete, but what am I doing? I'm making earrings. Up to these last couple of days, I'd say I've only made 5 pair of earrings total in 8 years. Today I've made 4 pair already, and my brain is reeling thinking of other twist & turns with the needle to make some different designs. BUT...I've got deadlines to met & dogs to bath, dolls to make, articles to write. Yet here I am, wanting to make earrings. So here's a couple of the earrings I've done. One is called Tree of Life. I got these glass buttons when in Detroit at the NIADA conference. I knew I'd figure out something to do with them. The other I called Green Pearl Wave. Oh, yes, I confess that I've been making bracelets too.

The earrings are part of the Ohio Beader's Showcase for February. Check out some of the wonderful artist we have in Ohio.

Now to make myself get back on track & finish up a couple doll projects I have & to start the beaded mask which I'll talk about later
Posted by flyingbeader at 7:25 PM No comments: Links to this post

Yeah, someone from BJP saw my plea for help in figuring out how to link to "buttons". Since I have no idea how to write HTML code, or even have an inkling to want to learn it, I'm just going to be a mooch & beg people to send me codes for their buttons. So, I'm S-L-O-W-L-Y figuring out this blogging journal. Thanks to Kathy for sending me the code & to Grace for writing it.
Posted by flyingbeader at 4:41 PM 2 comments: Links to this post