Fiona passed away Thursday here at home with Chris.  My heart is just so broken.  I've had so many people write to me with my previous posting about her getting attacked by a hawk.  Fiona was almost 13 and has had a heart murmur her whole life.   She was an April Fool's baby. She was born 4/1/200. She's survived having puppies,  septicemia, a seizure, and pancreatitis but the hawk attack was too much for her fragile old body. She died of congestive heart failure.


Here are pictures of our Fiona.  I think I've posted some of these before here on my blog.  I love my old girl still, and both of us will miss her forever.

Posted by flyingbeader at 9:51 AM 8 comments: Links to this post

I've been a little out of commission these past two weeks & have neglected so many things.  I started my new job on the 7th at Nationwide Children's Hospital.  AND the very first day, my sinus infection got worse, and I wound up getting bronchitis.   My old employer canceled my medical insurance on my last day of work, and I haven't gotten my new cards yet.  So I wasn't able to go to the Urgent Care when I started to spike a fever. Plus, I don't have any leave time for 90 days, so had to keep going in for training.  It was very hard to concentrate, but I managed to make it in and checked off in at least one department.  I called my Doctor's office & because this is flu season, and I go in annually, they called me in a prescription for antibiotics. Thank goodness, as I really felt so foggy and was feeling myself spiraling down with the bronchitis.  The antibiotics kicked in Wednesday and what a difference.  I'm able to concentrate, not cough up a lung, and able to think more clearly.

Thursday after I got off work, I was petting Fiona and noticed a huge bump on her back.  At first I thought she had been bit by a spider or some other insect, but the bump kept getting bigger and bigger.  I looked and found a penetration point which looked like a large bird had attacked her.  Several years ago, she'd been attacked by Cardinals, but this was much bigger.  I talked to a couple people and realized that she was probably attacked by the hawks around here.  I cleaned her wound, put cold compresses on the lump, and gave her aspirin.  She seemed to be getting better, but this morning she was lethargic and wouldn't eat anything.  I took her outside and she was stumbling all over the place.  All I could think of was that I could not lose her like we did Frodo and Arwen this Summer.  So I rummaged through my dog medication box and found some antibiotics left over from Arwen.  I gave Fiona another aspirin and the antibiotic. She just lay in a stupor, so I thought it was time to take her to the Emergency Room.  I woke Chris up to help me get ready.  He was upset too.  I hate taking her the the ER as usually that has been a very bad outcome for us.  I kept thinking if I could keep her going until tomorrow when I could get her in to see Dr. Miller.  I poured some milk into a bowl, and thank goodness that she drank it. Then I spoon fed her some canned food which she ate.   Then Chris got out some roast beef which she ate.  I then gave her her insulin and put her back in her bed to watch her.  She slept for about 4 hours, and then woke up hungry and ready to roam around the house.  She's over the crisis, but we are still keeping an eye on her and I'm taking her in tomorrow so the Vet can look at her trauma area which is black and blue and still swollen.  I guess you never think about hawks attacking a 25 pound dog, but others assured me that it often happens.

It has been too close to Frodo & Arwen's death to deal with Fiona getting ill.  What really made me think about them was when yesterday, I took Fiona out front to roam around.  There is a woman who has always walked her hound dog through our neighborhood and down the side walk between my & my neighbor's house.  That dog automatically knew when Frodo and Arwen were outside.  It would start barking two houses away, which naturally triggered Fro & Ar to jump up and start their packing up and down the fence waiting to bark back at that dog.  When Frodo took ill, I warned this woman to be aware of ticks as I always saw her letting her dog off leash to go down to the creek.  Well, yesterday, she stopped and asked me if my little dog survived.  I had to tell her that both of then died.  She told me how sorry she was and that she noticed it was so quiet anymore.  Oh yes, those two always made sure no one came near their house.  That got us both thinking about our two lost Scotties.  Maybe that was why I was so upset this morning when I realized Fiona was so ill.  But as I said before, I sometime think I hear them walking around or at times feel them cuddling up with me when I'm sleeping.  I know it is just me wanting them near again. 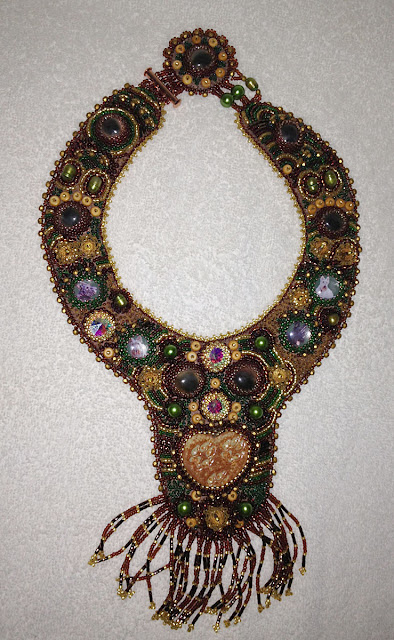 I have shown this necklace before, but I decided to take more pictures of it this week.  Chris had printed out pictures of Frodo, Arwen, SkyeBlue, and FalaPink.  I had some lenses that we'd gotten at an auction and used these to make cabochons of our four  Scottie angels.  Marti Conrad had sent me this ceramic heart with paw prints crossing it.  I decided to make myself a collar to wear so that I could have my angels with me all the time.  SkyeBlue is above Frodo, and FalaPink is above Arwen.  I know the images are a little small and hard to see, but I KNOW they are there.
Posted by flyingbeader at 1:19 PM 3 comments: Links to this post

I sent you an e-mail so please send me your home address so I can get the three 30-Minute books out to you.

dot
Posted by flyingbeader at 6:35 PM 2 comments: Links to this post

Labels: give away, Reviewed books

THREE BOOK GIVE AWAY for the New Year

Well, I managed to stay awake until the crystal ball at NYC Time Square dropped at Midnight 12/31/12.  Usually I work, but this time I wasn't working as I am officially semi-retired. That's right!  I put in my notice to leave Mt. Carmel Health after 29 years and 5 months.  I've seen so many changes at Mt. Carmel West and St. Ann's, but the biggest change was my decision to leave.  When I called Human Resources to find out about my pension, they recommended that I take early retirement.  So I followed their suggestion and decided to go ahead and retire.  So as of today, this is my third day of retirement and what did I do?  Well, I beaded, naturally.  My retirement is short though as next Monday the 7th, I'll be reporting to Nationwide Children's Hospital to work as a Medical Laboratory Scientist in the Core lab.  I'm excited, happy, and ready for a new phase of my life.
So I decided to celebrate the New Year and my RETIREMENT even though it is short, I'm going to do a give away with three wonderful Lark Jewelry and Beading books for you my friends.  I decided to end the give away on January 6th which will in actuality be my last day of retirement.  The give away is only for anyone as I'll be willing to ship internationally this time around.  To be eligible please leave a comment in this blog post making sure you have a way for me to contact you if you are the winner.  If you do not have a way for me to contact you to get shipping details or if I do not hear back from the winner by January the 14th, then the second name will be the winner.  So please, do make sure you have a way for me to get ahold of you.  Also PLEASE don't be worried if you comment doesn't show up instantly.  I have my settings so that all comments need approved by me. 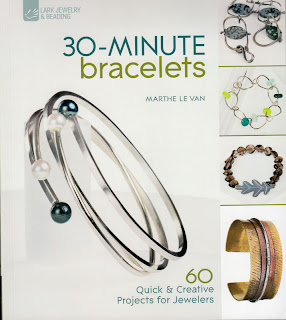 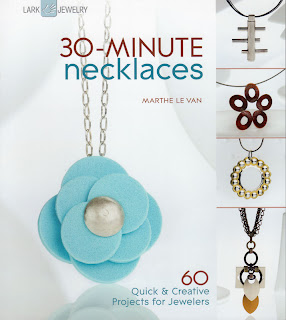 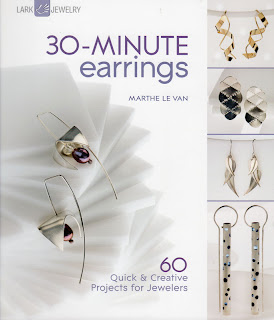 What am I giving away?  Well, I have THREE BOOKS by Lark Craft.  These three books are part of a 4 book 30-Minute series edited by Marthe Le Van.  They are 30-Minute Bracelets, 30-Minute Earrings, and 30-Minute Earrings.  Each book contains 60 projects so that makes 180 projects for one comment.  Sounds easy? Well, it is!  Each book is filled with quick-to-make projects for those wanting to have fun while learning new techniques.  The projects in these books are "primarily metal-centric, with some alternative materials, and they reflect a wide array of techniques, styles, and aesthetic approaches".  What a fun way to experiment and tickle the Creative Muse this new year for one lucky person.

If you can't wait to find out if you are the ONE LUCKY WINNER on JANUARY 7th, then you can always purchase these three books at Barnes and Noble and GUESS WHAT!  They are all 1/2 price!  What a gift.

And speaking of gifts...wait until you hear this!  Lark Jewelry and Beading is giving EVERYONE the best gift this new year.   I counted 29 FREE projects for you to download as a gift from Lark Craft Books.  What could be better?

Disclosure...As a reviewer of  products from Lark Books, I receive the book above free of charge. I have been asked to review these products and give my honest opinion of the products...positive or negative. I am not being compensated by Lark Books for my endorsement as it pertains to the products received and reviewed.
Posted by flyingbeader at 4:22 PM 39 comments: Links to this post