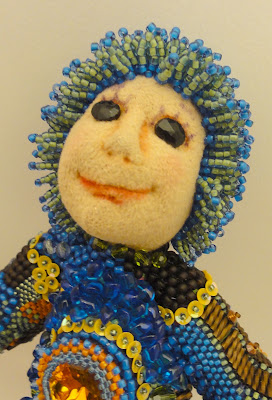 Last week was the deadline to send in our challenge piece for the annual Beading for a Cure. This is the fifth year that I've participated, and the colors for 2012 were a real challenge for me. I think a month before we actually got the purchased kit from Betcey at Beyond Beadery, I was hoping and hoping "no blue, no blue, no blue"! Well alas, it was blue with browns mixed in. I sat for days starring at the colors first off trying to figure out what would be my added beaded per the rules that would make all that blue less cringe factor to me. Up until this kit, I really haven't worked with blues that much. Oh, I've had to make kits up for classes I taught at Byzantium with blues as most students either like blues, purples, or greens while my color choice runs to either earthy tones or bright bright colors of Fall. So there was this blue starring up at me. I got out a color wheel as I'm trying to expand my color choices and nothing struck me. So I did what I always do when I'm stuck, I just go and look at everything I have getting immersed in the sparkle factor. I pulled out my sequins at the marigold was put in a pile of maybes. Then I opened a bin of vintage German glass cabochons that I bought...well, I don't remember where I got them, but one with a amber orange hue caught my attention. I played with it among the blues and browns and thought it might be the one color I hadn't thought of. So I pulled out a bin of Delicas and there in a plastic tube was this squash colored orange that not only matched the glass cab but seemed to make the browns want to dance. So there...my colors were picked. 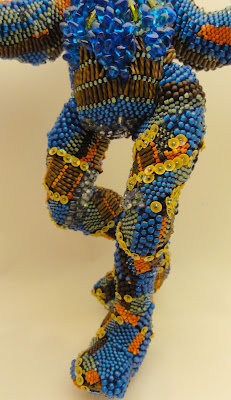 Now to figure out what to do with my colors. I toyed with making jewelry, but at that point I just couldn't decide if it was to be a big necklace, a cuff bracelet, or something else. I think I was just really burnt out on making a doll from 2011 BFAC challenge where I made a doll over 24 inches tall totally encrusted. I believe I was also a little disappointed that for such a large doll covered with pearls and crystals the final auction bid was less than $200. Could it be that it was too big of a piece, or my needle sculpted face wasn't pretty or cute? I find that most people are drawn to a beautifully painted or sculpted face. And since this is a challenge besides an auction to raise money for colo-rectal cancer research, I found to make a pretty or cute type of face would be perfect for me. I've been toying with smaller faces that had more delicate or even child like features. The last two collaborations with Chris with our "Space man" and "Bot vs. Boy" used my new pattern and more defined needle sculpting for a "sweet" face. I thought I'd use that pattern and make it more into a doll that could be held in with out spread arms. I also wanted to work more on needle sculpting fingers and palms in a smaller scale, so that too was another challenge for me. My third personal challenge for the 2012 BFAC was to go back to another needle weaving technique besides netting to cover the limbs of the doll. I decided to go totally peyote! I had done a couple smaller dolls about 4 years ago experimenting with using free form dimensional peyote to cover a rounded doll form. I got out my old instructions I'd written for an article that never got published and sat studying them to get an idea on where to start. Well, to start is to just START! I began by using a peyote stitch to encase the German Glass Cab (learned this from Beki Haley at the Tahoe Bead Retreat and from a couple kits I purchase from her). Then I just began sewing down beads in a random pattern and let the flat peyote take over my needle. Next thing I knew the whole body was covered with a rag tagged free form patchwork of colors. 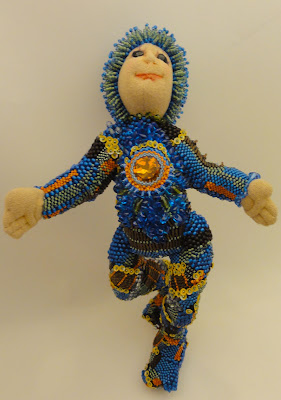 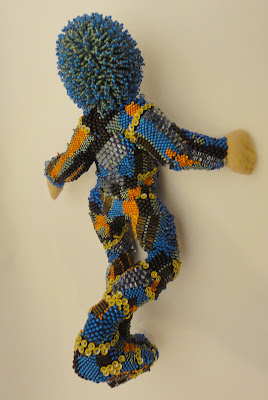 I made three heads for this doll picking out the one that had the sweetest expression. Then my favorite part...beaded hair. This time I used a netting technique combined with stacked stitch to create a head of luscious hair. I actually did run out of the one blue color from the kit and was lucky to have Betcey send me out another tube. Now one thing, I'd never used before were the magatomas. I had no idea what to do with them, so I sewed them down in a random pattern to give more dimension to the work. Now, after taking classes with Carol Wilcox Wells in Milwaukee this past June I realize how much more those magatoma can be used to create interesting embellishment as I'll reveal in the next two weeks (I've been having a blast experimenting with them along with my new love-Right Angle Weave
Posted by flyingbeader at 9:12 AM

Labels: Beading for a Cure

your doll is beautiful

Dot
I love him. How disappointing that your last doll did not sell well.
The orange makes him pop and his hair is fabulous. keep it up
Diane, New Zealand

Tibbs is a treasure, Dot! You can be sure I will be bidding on him.

L love your work!! It is amazing!!