I thought I'd show you another one of my Scottie treasures that I've been collecting since 1989 when I bought my first Scottie Fala Pink. This is one of my Remler Radios. I could never afford a working radio as they are highly collectible by Scottie collectors and antique radio collectors. But you know when you want something, you want it. Here is where I am in lucky. When eBay first started out, you could find such great deals there. I found an auction where the person was selling two Remler's that were in bad shape. I got them both for a song but since they are vintage radios & the chassis were so heavy, I did pay a hefty shipping cost, but it was still a deal. Then the magic happened. Chris loves to refurbish vintage radios and televisions. To him it was a challenge. Of of the chassis were a wreck and on the other the shell was cracked. So Chris set to work to build one working complete radio from the wreckage of those two. Here is what he came up with. Isn't it great...and the best part is that IT WORKS! 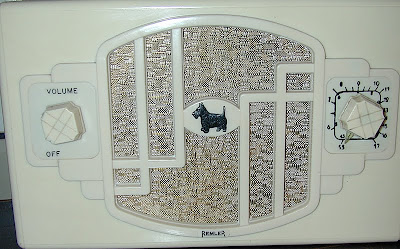 Here is a little history about Remler Radios. There are so many more models out there & I'm always looking to add another on to my collection.
---------------

Posted by flyingbeader at 3:29 PM

Terry has this style radion in the back garage which has become the place that he collects...welll...everything. I'll have to see if its an orginal or a copy cat.

I had no idea there was such a thing! So cute - way to go Chris on the refurb job!!

I had just had to comment about all the beaded creatures in your header -- oh my goodness! I bow down to your supreme creativity. I'm in awe. Total and complete awe.