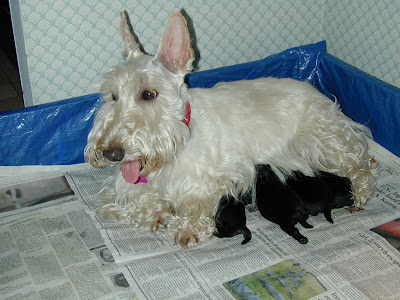 I have been neglectful of Scottie Sunday and haven't had a chance to get any pictures of the things I have collected over the years. It is Spring, and I have a bad bad case of "puppyitis" since people have been showing pictures of new puppies all over the Web. So, I had Chris get out the file with the pictures of Frodo as a puppy. He with two other brothers and one sister were born 8 years ago next month. Fiona is his mother. Now Fiona is a wheaten colored Scottie and back then it was extremely difficult for me to find a male with the wheaten gene that was not related to her. I would have had to have sperm flown in from Canada to find a male I could safely breed her with. And it would have been really expensive. My mentor told me that since she wasn't "tested" or in other words hadn't had a live litter yet, we should wait before spending all that money. So I breed her with a WildWind black male. The puppies are all brindle which is hard to see when they were still so young, but if you look really really close, you can see a bit of brown fur by one puppy's closed eyes. 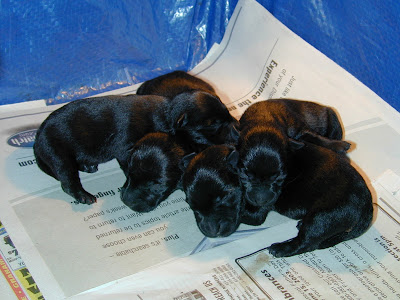 I don't know who was more excited about the puppies...me, Chris or Skye. Fiona could care less & it took three days before she finally became a Mom. She did a great job, but she really didn't care for being a Mom so this was the only litter of puppies she had. We have Frodo, Cynthia had Forrest (he passed away last Summer), Irene has Andy, and Fiona's breeder HAD the only girl but her husband "lost" the puppy when she was only 9 months old. 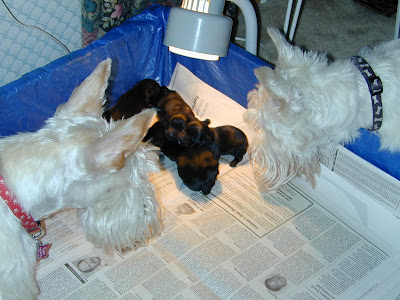 So enjoy some really Scottie Sunday pictures from me. Fiona has the red collar on in the above picture and Auntie Skye has the black collar on.
Posted by flyingbeader at 3:57 PM

Awwww, puppies! They're so adorable :)

Hello! And thanks sooo much for coming on by my blog! Wow - you have scotties! I have a westie. Love my terriers :-)
And WHAT an amazing artist you are...incredible what you can do with beads! I love Mr steampunk in your last post. Did you make robot too?