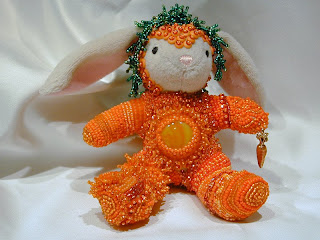 Yesterday at Byzantium, I taught a very small hand held doll called Guardian Angel. I originally was suppose to teach this class back in January, but that was when I had that case of Vertigo that kept me from driving too far for over a month. Most of the students registered from that class were willing to wait for a reschedule. It was so fun to have a full class with faces that are getting to be familiar. I only had one new person, so we all had such fun talking and laughing while beading this small doll. Picture? Well, I left the doll there at the store, and you know I never got a picture of it before I submitted it to Roxy. I keep forgetting how much fun I actually do have teaching beaded dolls. I did learn something yesterday also. I need to concentrate on smaller projects so that students can not only learn techniques, but have something to take home that looks almost done. Andrea asked me to reteach the cuff class, so I'm going to come up with another sample using the flat method instead of using the blank inserts. Also, another woman asked if I could do one of the Trick or Treaters...the monster. So I'm thinking to reduce the size of the monster so it fits in a pocket and to find either some buttons with monster type faces, or to actually make one up myself make a mold of it. But tiny, is going to be the word.

Another thing about Byzantium before I share my May Bead Journal Project. I don't think I've posted a picture of Fantasy Swim here on my blog. Fantasy Swim was my 2006 Bead International submission for the Dairy Barn. Fantasy Swim took me 6 months to make & was my first assembalage piece. At the Dairy Barn, it was in a glass case in the front of the other displays. I was so proud of my funky mermaid with her court. BUT...it traveled around the US in other galleries and finally came home a week before Christmas 2008. It has been sitting in my front room since then. I decided to take it to Byzantium and live there for awhile so others can see it took. I'm also going to concentrate on teaching stitching elements as completed on Fantasy Swim so this also will be a promotion for my classes in 2010. So there it is, and I'm hoping it finds someplace to be displayed so future beaded doll addicts can see her.

Now for my May project-Sprout. As you remember, I'm all about recycling this year. For May, I've decided to do a rabbit. It was originally a beanie baby from a fast food Happy Meal. I love orange. DUH! I've made other muslin rabbits disguised as carrots, but they've all been sold. So I had nothing to make me laugh. Therefore, for my May project, I made this bunny disguised as a carrot. I showed it to Frodo when done, and he could care less. He's more interested in the BROWN bunnies that roam around our yard, and sit on the patio daring him to get outside and catch them. Oh yes, we have many many bunnies in our yard. There are 5 big evergreen trees on the back of our property, and I think the rabbits have their homes there. Well, no I know they do as I can't tell you how many times I have to go out back and pull Arwen & Frodo from the back where they are barking and barking at a stupid rabbit. But then the rabbits aren't stupid as they know those stupid dogs will bark and bark and bark while they sit grooming their fur on the OTHER side of the fence where it is safe. So for all those bunnies who torment my dogs, eat my bulbs, and dash out in front of my car every single morning...May is for the Bunnies! And, this bunny is sitting in a display case at Byzantium with my blue jay because I'm teaching Trash to Treasure on June 20th. My class is half full already, and I've been asked to teach it here at my house for those who aren't able to make it to the class. That is also the week for the Quilt show here in Columbus. I had to ask Chris if it would be okay to have the house with crazy beading ladies here. He said why not...doll makers, Scottie owners, beaders...what is the difference? I agree...all friends having a good time.

dot
Posted by flyingbeader at 10:26 AM

Sprout it wonderful - I love him! If he ever needs a new home with Scottie dogs, he'll be welcome here in the UK!!!

Your May bunny is fabulous, the golden carrot hanging from his foot is precious.

I love the beading techniques you have incorporated this month into your "Carrot Bunny"!!! He looks very proud, happy, and green to be the focus of your artwork and your conservation/recycling awareness!

Dot! I just love your little critters so much, & your use of theme, color, texture...well, I just had to subscribe to your feed! Now I hope I can keep up! I just LOVE your work!
Thanks for sharing!
Warmest aloha,
CC

Whoo-hoo! Three cheers for Sprout and three more for carrots. Well, OK, let's cheer for orange beads while we're at it, and for recycling Dot!!!!! Can you tell I'm enthusiastic about your May BJP??? Yup, I certainly am! Robin A.

Sprout is such a cutie! I'm absolutely entranced with your previously loved toys. Just think of all the laughter and cuddles they've participated in. Not to mention all the secrets the little ones shared with them. If only they could talk!

Love the orange bunny. Reminds me of how we used to dress porch ducks to look like something besides a duck!! You tantalized us with talk about the Mermaid. Where can we see her?

I am so glad you teach and wish I lived near to take a class. I always worry that needle arts will be lost to the next generation.

this bunny is totally delightful!!! Congrats on all your teaching classes... you have so much beading talent to share...

Thank you everyone. I am having so much fun beading stuffed animals. I actually have sold most of them. The other day I was wanting to look at all 4 of the bears I've made & realized...three of them are gone to other homes. So I guess they are part of Treasure Art someplace else.
dot