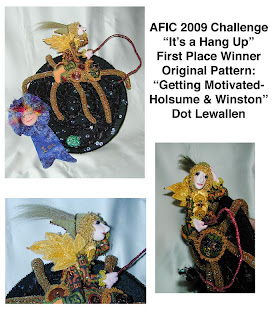 YES!!!! Imagine my surprise when I found out that my piece for the 2009 AFIC Challenge was picked first place original design. When I entered this piece & saw some of the other entries, I knew I hadn't a chance. The exhibit hall was opened Friday night at 8 pm for the conference attendees. Cynthia & I were late getting into the hall because we were "visiting" (or yakking away with everyone). I was only about 20 steps in the exhibit admiring all the teacher's dolls, when Cyndy's sister Patti comes up to me & asked if I'd seen my doll yet. I told her "no", and then she told me I had to "go see". I looked at her with a question & she just pointed me to the back where the last of the challenge dolls were hung up. Cynthia told me she'd go look first. I stood & watched as she went to check out what Patti had steered me to. Then I saw Cynthia pointing & holding her hand over her mouth. I walked back & there on the wall was a first place ribbon next to my doll. I jumped for joy! I never thought my spider rider would get chosen as first place. Everyone came up to me then & congratulated me. When I saw Rosie who was one of the judges & thanked her, she told me I deserved it. You can't imagine how proud I was at that moment. Four years ago back in 2005, I attended my first AFIC conference in awe of the talent. Now, my piece got chosen best. What a distance I've come in those years.

This is part of my recycle theme. The whole piece is mounted on a 78 record which has been covered with black wool from an old skirt. The vest and wings of the doll are from a piece of lace I got from a fabric salvage shop in Barberton Ohio.

The spider is the first doll I made. He is called Winston. At first, I just was going to have only a spider on a web, then I sewed up a doll trying my hand at using limbs. I loved this wee guy & just to see if the size was right for a beaded doll, I placed him on Winston's back. Winston looked surprised, but welcomed Holsume. So they became partners. Winston was leery about leaving his web, so Holsume found a fly to entice him to move. Therefore, "Finding Motivation".

Winston & Holsume will be traveling later this summer. They are going to the Ugly Bug Ball in Maine.

dot
Posted by flyingbeader at 10:15 AM

OMG, I actually had tears for you while I looked at the close up of your doll. They are amazing and you are so talented.

But...I hate to tell you this but, they ain't gonna win no UGLY bug contest..Thats For Sure..cause they ain't ugly!!!

Congratulations. Your talent is appreciated by all.

How freakin' fantastic is that! Congrats!

Congratulations! It is a well deserved win. Love the beading you do.

Congratulations!! How exciting for you.

CONGRATS!! Your doll is FANTASTIC!

Hip Hip Hooray for you!!!! No one could deserve it more. Your dolls are always spectacular.

It's an amazing piece .. just wish I could have seen it in person .. maybe someday I'll make it to a conference!

Way to go! Congratulations on a prize well deserved!

Congratulations! That is so neat.