It has been seven months since we brought Sammy home to live with us.  I still say this, but it feels like it has been years that our little boy stepped into our lives.  He is such a joy and comfort to both of us.  I think if it wasn't for his happy little self, we still couldn't cope with the grief of losing Frodo, Arwen, and Fiona.  He makes us smile.  He makes us laugh.  He makes us "walk the dog".  I bought a seat belt for him as most of what we had before is way too big for his 18 pound body.  He was so patient has I tried to figure out how to put the harness on him.  Then he sat perfectly still all the time in the car even when we were in the restaurant. 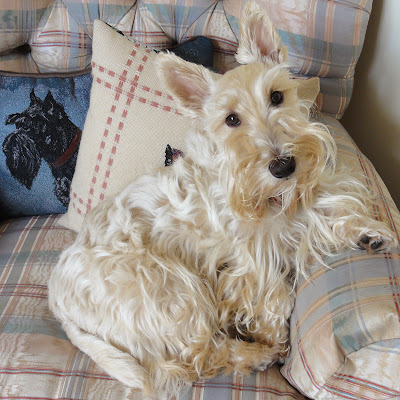 We got a new furnace this week, and we both were concerned that he would bark all the time the service people were here, but he gave a few woofs then settled down next to the bedroom door protecting me while I slept.  Oh yes, that is one of his jobs and he takes it very very seriously.  On my nights off, I sometimes hear him patrolling downstairs and then comes back up the stairs falling asleep (but still vigilant) on the stairs so he can be aware of everything.  He loves to jump and there is no toy he doesn't fall in love with.

His bedroom is in the studio where he loves to go to bed 15 minutes before I leave for work.  In that room every morning are about 6 little stuffed dog toys surrounding his bed.  I have to chuckle as it reminds me of my sister Cheryl who while a little girl had to sleep with every single doll in her bed.  I bought a package of three little stuff toys from PetSmart for him and upon opening he decided that he wanted all three NOW!

He loves popcorn.  What dog doesn't?  He loves late night walking in the neighborhood making sure Mr. Skunk stays in his area.  He loves sitting at the back fence watching the elementary school children playing in the field.  He loves barking at the squirrels who like to hide their prizes under the grill cover.  He just loves everything. And we love him too.
Posted by flyingbeader at 1:47 PM

I'm so glad you have a new fur baby in your life, they add so much to our lives! I just got a new one myself, he is 1/2 chiuaua and 1/2 shih tzu, totally cute! he looks like a miniture English sheep dog, he is so full of energy and excitment, into everything!

OMG, how cute is that! And BTW, I so enjoyed meeting you in Gahanna. ;-)