Since I now have weekends off, we thought that it might be a good weekend to head down to our hometown of Portsmouth Ohio to see if any of the Fall colors have appeared.  We decided to take Sammy with us using his new seat belt.  Sammy is use to traveling with his previous owner, so he pretty much settled into the back seat and sat alert watching the scenery whiz past as we headed down Rt. 23.  It was a cool Autumn morning with bright blue skies, but as soon as we got with miles of Chilicothe Ohio, the fog rolled in along with dark gray ominous clouds.  Not a good omen. 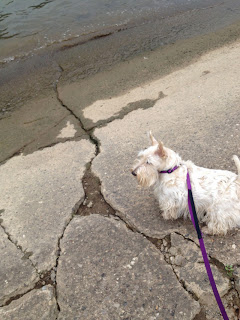 We made it down and decided to head to the Mighty Ohio River.  Sammy fought his first battle of the day on the banks of the Ohio after a barge slowly cruised causing waves that just could not be tolerated by any terrier.  We walked him along the bank, then went back on the other side of the flood wall to view the Flood Wall Murals of Portsmouth Ohio.  Many people were also strolling along taking pictures and looking at the Murals of the wonders of Portsmouth's past.  Both Chris' and my paternal family were founders of Portsmouth.  Each of our families have chapters in the History of Scioto County.  My Father's family came to this area settling in Alexandria which was on the other side of the Scioto River, but due to flooding and the Indian Wars had to leave, but returned after the area was safe for settlement and were one of the few families making the banks of the Ohio and Scioto River their homes.  My Father's Mother's family were also founders, but they were here long before the white settlers crossed the mountains into the fertile Ohio River valley.  So I do have deep deep roots here. 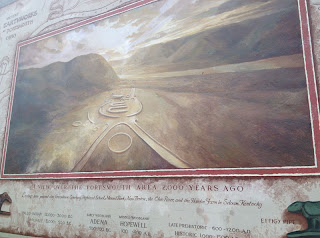 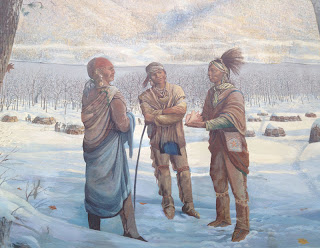 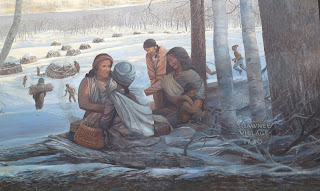 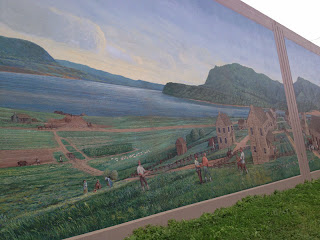 Here is a You Tube of the about the Flood Wall Murals of Portsmouth Ohio and the Ancient mounds that were found in this area.  Most of the Ancient Indian Mounds are gone, but there are a few left to showcase how important and rich this area was.

Posted by flyingbeader at 10:52 AM

great post!
I had reason to travel several times to St. Joe Mi along #31 which crosses the St. Joe River a few times. Funny, I live 3 blocks from the St. Joe, but those trips north made me wonder about its history. Also a FB post about the timeline of Michigan City where I grew up depicted the City's rich Indian/trading history.

Its so cool to know the history of your area, especially for you because your families' part in founding your home town.