What a Summer! All I can say is thank goodness it is September 1st. Since I got back from Seattle, we've been back & forth to the Vet so many times with Fiona. There were days in the beginning when I thought she was not going to live. Her Diabetes diagnosis was a real shock to Chris & I. We had no idea, then on top of that she got Septicemia from a Bladder infection. She lost 7 pounds, was so lethargic, and would not eat. Slowly we've increased her insulin, changed her diet so many times, and finally...FINALLY have her semi regulated. She is blind from the Diabetes and is slowly adapting to getting around without her vision. She had so many bad days last month, that we cried so many times seeing her exhausted and drained of energy. Then one day, she perked up and demanded to go outside for a walk. A WALK! We both cried with happiness. Every day she gets better and better. She had energy, she demands to eat, she waits after eating so I can give her her shot, and she has learned to go in and out the back and front and yesterday she jumped up onto the couch without help. So, I've been a worry wart.

Work has had its ups and downs. It has been so busy with the hospital full many days and the ER just overcrowded and very busy. It has to be the heat. Oh yes...the heat! This is the 5th hottest Summer in Ohio. My electric bill can attest to that. Sometimes I'm just happy to be at work to stay cooled. We have air conditioning in the house, but it is getting old and do I really want to pay that much money? So we keep it a little warmer than normal. Most of the time it does not bother me...because I'm in the basement creating!

Byzantium shut its doors in August. I cannot divulge how much I spent in those last weeks. Let's just say I won't have to buy beads for years & I have some lovely new pieces of jewelry to wear. I bought two of the seed bead racks from the store. I wanted something to remember Byzantium by. Chris hung it up and I spent three days sorting through beads & hanging them all up. I've got to get a picture of that to share as it is something quite amazing. I also got invited to teach at 1 Stop Bead Shop here in Columbus. We are working together on getting at least one class for the Fall. I'm also working on finishing an on line class with A is for Artistry. Boy that is hard. I also had a week there when the stress from Fiona's illness was so much that I got Hal my sewing machine out and sewed up a dozen monsters. 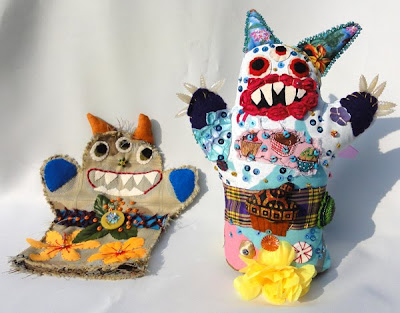 And I've been working on my recycling theme too. I gave a challenge to the gals over at A Bead Story to use plastic toys/animals into making a piece of ART! Here is one of the pieces I came up with. Cynthia & I were at a gift shop in Ocean Shores Washington, when we saw these adorable animals. We each picked out a couple and decided they'd be perfect for the challenge. I decided to use the trio of Hedgehogs to begin. I also got into my box of junk & found an old Avon plastic jar that had some type of body cream. So out came the beads and sequins, and I completed this beaded jar in a week. I wanted to keep the basic jar clear so that pretty vintage buttons could be kept inside. Funny, but when I took this over to 1 Stop for everyone to see, they could still smell the body lotion when I opened the jar. This was a fun project & I have a feeling you'll be seeing more of these from me in the future. I also completed a box with the plastic elephant, but you'll have to wait on that one. 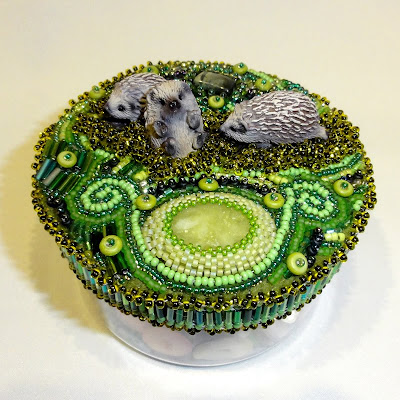 So here I am wanting to complete some things for September. I also need to play catch up on my Bead Journal Project. I had a real collapse of inspiration in telling the stores behind the the Treasure jars, but I think I'm on the road to recovery. I also have a vacation coming up soon. We are going to Hawaii for a 2nd honeymoon. Chris has a brand new camera so I'm sure there will be lots of great pictures.
Posted by flyingbeader at 8:14 PM