I thought I'd forgo beading or doll making today & show some pictures of the aftermath of the two big Winter storms. I was measuring the accumulation in the backyard where we did not shovel to make dog paths & it was anywhere from 24 inches to 30 inches depending on which part of the yard I chose. If you were following me on Facebook, you know that the Ohio River Valley has been getting hit with one snowy Winter storm after another. We haven't seen this amount of accumulated snow ever! Oh, we've had more record snowfalls per one storm, but not one after another after another.

I live in a smaller neighborhood on the north end of Columbus. Luckily 4 years ago, I decided to transfer from the bigger hospital in the downtown are where I'd worked for 23 years to the smaller suburban hospital which is only 2.9 miles from my house. At first, I did this to save on gasoline as I was having to fill the tank of my Honda Element at least 2 times a week, and back then gasoline was over $3.00 a gallon. Plus the wear and tear of driving 35 minutes to work one way was starting to make me tired all the time. And shall I mention the Winter...trying to get out of this neighborhood was a nightmare. I'd been driving a Thunderbird since we moved up here in 1989. I LOVE my T-birds, but they cannot handle Winter conditions. I'd get stuck getting out of the driveway even with only 2 inches of snow. So I bought my boxy ugly Honda Element. It was the smartest thing I've ever done! Other cars this whole Winter get stuck right in front of our house as we are in the apex of the neighborhood's "U" shape. Snow drifts down & settles right smack dab in front of our driveway. Now I just put the Element in reverse and have never had to worry about getting out no matter what the weather. Wow, I feel like I'm doing a commercial for Honda. But I swear, if it wasn't for this little SUV the 2.9 miles to St. Anns would be a nightmare. Especially when there is mountains of snow just in the street.

Okay, enough about my Element & getting out of the neighborhood. But if you'd gotten stuck as many times as I have, then you definitely understand how exciting it is to just drive drive drive in the snow & not worry. Now, walking the dogs in another matter all together. OR letting them outback to do their "duty". Frodo is the worse in snow. He loves being out there because #1, he can see the rabbits hiding under the evergreens, and #2, he can bark at the rabbits hiding under the evergreens, and #3, he knows I can't do a darn thing to make him stop! Yesterday when I got home from work, I let everyone out thinking I'll fool Frodo...I put coats on the girls (oh, they all have their Land's End jackets in different colors & don't you dare put Fiona's navy coat on Arwen or Arwen's sage green c 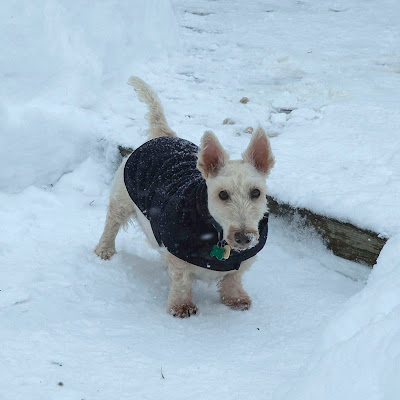 oat on Frodo...they know!) but not Frodo. I thought he'd get cold & come inside. He has trenches with walls above his head beaten out all through the yard and once out there, I cannot get him to come in unless I go out and show him the "mad Dot". BUT, yesterday we had freezing fog so the whole steps were covered with ice. They are dangerous...I know...I have multiple scars on my head where I've fallen & had to have stitches. So, back to my story. I just thought he'd come right back in so I could give them breakfast & then to bed for me.

Fiona wanted to come in, but she couldn't get up the icy steps. I took a big towel & put it down for her to get up. Arwen followed her in. No Frodo. I could see the tips of his ears peaking out from the trenches, but when I called him, he just ignored me. I shut the door & went downstairs for 10 minutes to wait him out. Came back up & called him...took the broom & hit it against the steps (the darn broom broke), but Frodo just stood starring out the hole he'd made in the snow so he could see the school playground. I shut the door again & fed the girls. I waited 15 minutes more knowing if I waited too long school would start & he'd bark so much that the phone would start ringing from the neighbors. He ignored me again. I went back downstairs to wait 5 more minutes. Came back upstairs & Arwen was fast asleep on the couch with Fiona snoozing away on the leather chair. I opened the back door again...the blasted little dog still ignored me. Then the children started to go to school. He ran up & down the fence line making new trenches by hopping over the barriers and making tunnels. I shut the door & went downst 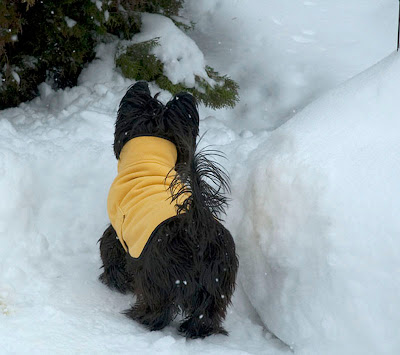 airs again. By this time I was just about ready to go to bed, leave Chris a note saying his dog was outside probably frozen when Chris comes down shocked to see me inside. He said he thought he'd find me passed out on the patio where I'd gone out to get that stupid little dog & slipped on the ice knocking myself out (oh I've done it before) as he heard barking then nothing. So finally, finally, finally, Chris put on his boots & with my help was able to get down the icy steps to make Frodo come in. I was so mad at him, but tell me...how can you truly be mad at such a cute dog for doing what he loves to do. It is his yard. He is in charge. And he loves doing his job. Oh well, the snow is melting so I'll be able to get out in the yard again. That is until Sunday when we get MORE snow.
Posted by flyingbeader at 12:54 PM

Hey Dot, you have no idea how happy I am NOT to be living in North Idaho at the top of Look Out Pass. We would get easily 9 feet of snow in our yard in winter. I complain about the gray in OR. but at least we don't have snow. Thank goodness.

Yep, we're getting more on Sunday too, but I think you have been hit way harder to the south of us.

UGLY Honda Element??? HOW can you SAY that. I think mine is the coolest SUV on the road. I LOVE it.

Hey, how bout those Scotty dogs and the dog show!! Were they hoppin up and down??

Back to beading now!
xx, Carol

Wow, that's some serious snow!! Do hope the next round you said you were expecting will be much lighter.

Hi there! I just got caught up on your blog. LOVE all your stories!! Come on spring! HURRY!...