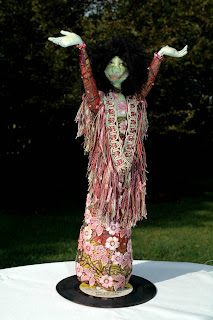 Here is another new doll that I made based on the class that Patti Culea taught at Think Pink. I was going around calling her Dead Cher or Zombie Cher as she is green, but thought I better not do that. Don't' want to get into trouble. The face & hands are from Patti's pattern, but I decided to do the stump doll. The fabric is batik that Cyn sent me & I used a layer of organza to give it a richer look. Then I used rose trims that I bought at Joann's & sequins from Bead World in NYC. I stepped back & thought to myself..."wow. My Grandma had a dress that looked like that. At the conference after I finished painting the green face on "Cher", I couldn't decide on the hair. Patti had folks making hair out of fancy yarn, but it didn't see to fit. So I got out a bunch of wool and Tibetan lamb wool. I tried several pieces & had others in the class giving me suggestions. Then out of a whim, I pulled the black lamb wool out, plopped it on her head & instantly she became Cher! The boa she has is from a shop in NYC that was having a moving sale & I got that beautiful fringe trim for a quarter. Lucky me!

After I had Cher all done, Chris & I were at a garage sell & we found several Sonny & Cher albums. He wanted me to photograph her in front of the Greatest hits, but when he showed me that scratched up 45 of "I got you Babe" I know it had to be part of her permanently. So, I've got to mount her on that record.
Posted by flyingbeader at 3:52 PM

This doll is amazing Dot, I love love love her....

Absolutely FanTAstiC! Your art is incredible!

well you know I like Cher! I was there when she came to life! but you know who my fav is......I think she's yours too!

This is fantastic and great story with the record and all.