It is cold & snowy in Ohio. I saw someone over on Facebook say they wish people would stop complaining about being cold in the Winter. Blah! I can complain about anything I wish...and I WILL! I think the older I get the worse the weather affects me. Use to be that it was a small ache here or there, but now my poor feet that were broken multiple times when I was young feel the change & "complain" to me especially when I'm at work. Also, since I had the sinus surgery last year, my sinuses really "complain" when the weather is bad outside. Last night at work, my nose ached so bad that I thought I was going to pass out. Oh the joys of getting old! I use to laugh at my Dad & his sisters sitting around the dinner table shooting the fat talking about aches & pains. Cheryl & I said we would never do it....HAH! Now that she has had a broken ankle, I find much of our conversations deal with aching feet!

Chris & I are addicted to Netflix. We get one movie at a time, but are we ever enjoying going out to the mailbox once or twice a week to find a new movie or an old "jewel" out there. Remember if you haven't seen a movie...it is NEW! So this week, Chris got Woodstock. I was a freshman in high school at the time living in Portsmouth whose radio station had banned the Rolling Stones and other provocative music. I missed hearing great music from when we lived in LA. So I knew it was there. At night, I would lay in my bed with my 9 volt transistor radio under my pillow listening to a statio 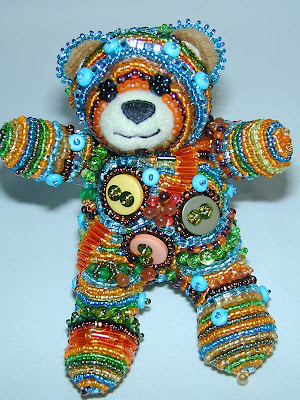 n coming out of Chicago. But back to Woodstock and creating. I had made this beaded bear with beads sent to me by Artbeads.com in their beading for bloggers program. I used their Toho Bead Mix called Neon Frost. As before, I had to add beads to the 5 bags because they were not enough to complete the project. I liked the challenge of trying to get all these different sizes incorporated into a pleasing pattern on a stuffed animal, but it was tough. So I do not recommend that someone without experience use these for a beaded doll project as there were lots of size 15s & if you are using a stuffed animal with some sort of textured "fur" those 15s get lost. I did use them as an over embellishment. Chris was looking at all those wild colors & told me it looked like something a person would see from an LSD trip. I wouldn't know! But after watching bits of Woodstock with Chris, I decided to call this bear after that movie.

I also completed my piece from AFIC last May. Her head had been sitting on my work station for that long starring at me wanting to get finished. So finally, I got out the body, the legs, the arms, the tail & put the body together. Then to cloth this adorable troll. In Ute's class we us

ed clothing from a thrift store. I had about 4 different outfits that I bought from the baby section at our thrift store & decided this dress was cute. I had to really cut it up to make it fit this troll, but I did it! The shoes are ones that Cynthia gave me & yes, those are my own socks cut up & sewn to fit the troll. The hat was one that I probably spent the most time making. I used a piece of wool felt and rubber band it onto a light bulb. Then I Modge Podged it all over & let it dry 42 hours. After that, I cut out small silk flowers & sewed them all over the trolls hat & then on her shoes. She wasn't complete until I found this small pail I bought at the Dollar Store. I think it originally had been some wind chimes. So she was finished & once again was starring at me. I had to give her a name. Finally out of the blue, whispered to me that she was Doris. So world...met Doris!


Disclosure...As a reviewer of products at Artbeads.com, I receive the Toho Bead Mix above free of charge. I have been asked to review these products and give my honest opinion of the products...positive or negative. I am not being compensated by Artbeads.com for my endorsement as it pertains to the products received and reviewed.

Posted by flyingbeader at 2:02 PM

Your bear is so awesome! and you did great of course with the doll, but your beaded bear just amazes me! Don't you just love ToHo beads! They are about the only beads I buy anymore! I love their mixtures of beads they have!

Love this! The colors are so fresh and pretty, you did a great job. About how long does a project like this take you? How does one get into this program with Artbeads? Thanks for sharing.

Well, you reeled me in when you said you could complain about anything that you wanted! Exactly my sentiments. If I could live where its warm, I'd be there!!

So, you listened to WLS and Dick Beondie I bet!!

OMGosh!! I love Doris. She is Superb! I love her face, her clothes, especially the hat. Yep, I think I'll probably look like that in a few years. ~lol~

I love your doll from your class with Ute! She is fabulous. She is like an old washer-woman, so much character. And your bear is great, as always! The colors are wonderful. You know Dot, if you want to complain about the weather just do it - you are in good company with Pam and myself!
Mary

Dot, I love the bear. Such wonderful, bright colors. And, wow, Doris is amazingly adorable. How big is she? You just amaze me, and I want to be you when I grow up.
CAT