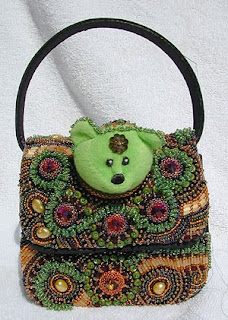 Okay, here is some more close up pictures of the purse I'm working on from the class I took with Sherry Serafini. Yesterday was a very nice Sunny day which sometimes can be unusual in Central Ohio. We are not known for cloudless days. Chris was taking pictures outside & thought to get some extra close shots of my purse. I just glued down the beading, and am working on sewing it down, then to fringe some of the edges. I'm also working on a square stitch piece for the handle. Yes, I really do want to use this purse. We were getting shots for the Land of Odds contest. Rachel's Dream has been done for several weeks, but I'm still struggling with the story they want. I was done, then went over the requirements for the story again, and realized I might have gone wrong. I was pretty distressed as I've got to get a CD burned & sent out for Warren to get by the 31st. So I sat Chris down & read what I had written. Now that is always tough as I am a tad bit verbose in my writings, but he actually liked it. Only told me to change a couple sentenc 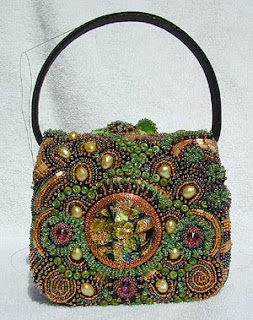 es (shock!). I'm over 5 words from the requirement, so I need to go back over the story & get rid of a measly five whole words. But anyways, got the pictures back from Costco today. AWESOME! They did a great job. Chris surprised me by getting a big 12 by 18 picture of close up of the beading on Rachel's Dream. It was only $2.99, but you can see every single bead. I'll definitely be posting more pictures of Rachel's Dream when I'm allowed due to the contest rules.

Now here is a picture of the back of the purse. Isn't that dichroic donut I have just awesome. It was the base of the color selection. I had bought it at Byzantium, when my eye caught something in one of the middle of a case. I had I think it was Corby pull it out & I bought it right then & there. I had no intention of using it for this purse, but when I got home, it just screamed at me. In the center of the donut are these sequins that I bought last year in NYC when Cynthia & I went to celebrate her 50th. 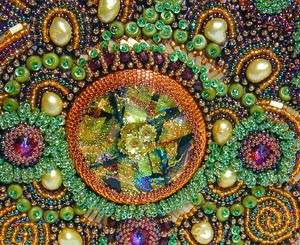 I am going to do a fringing off the edgings with these tiger eye chips that I also bought at Byzantium. I usually don't use stone chips, but the colors just matched this whole palette so well. I even took everything to the Sun filled window to check it out. So after I finish the edging, I am going to start the fringing. One thing did go wrong when I was working on this purse. In Sherry's class she told everyone not to cut out the Lacy's Stiff Stuff but I think 75% of the students didn't hear that. I didn't think I'd have much shrinkage, but I did so I'm going to have to do a little tweaking here and there so as not to attract attention. I'm hoping to get the purse done by the end of the month so I can add it to my 12month Bead Journal Project. But if I don't, then I'll definitely will get it finished before the Bead Unique Retreat in Tahoe.

Back to writing THAT STORY! dot
Posted by flyingbeader at 7:13 PM

I am totally in AWE!! Your purse is absolutely stunning. Sure do wish that sometime I could manage to see it in person. If the wee doll you did for me in the swap is any indication, it must be spectacular!

Hi, I found your blog from ArtGals's post and I just love it. We are the same age and since I love to read, your blog posts are so intresting. Your beading is beyond compare. I especially liked the post regarding the Moon Mission. I am looking forward to catching up with you. Susan

OMG Dot, this is gorgeous! not just gorgeous, but STUPENDOUS! I am SOOOO Jealous that you got to take that class!!!! I'll have to put that on my dream list. Wow. great job and I love, love, love the colors.....

Thanks all & welcome to Elizabeth and Susan. I am an obsessive type of person so that is why this purse is dominate right now. MOF, instead of sleeping when I got off work this morning, I sat downstairs & worked on the purse for an hour. Alas, the tiger eye chips just don't want to fit. I guess I'll have to ask Sherry next time I see her about doing fringe off the purse edging because it just didn't look good. SO...I'm doing a picot edging & might make it ruffle out.

WOW!! Love the purses and all of your beading. Beautiful. Go to my blog YOU WON!! Need your mailing info.
Hugs
Fran

Hi there! I am in serious AWE of your purse! WOW!! Not to mention your energy and excitement that is coming through. It is clearly your passion!! Best of luck to you!!

Dot, good luck in the contest. The purse is absolutely amazing. We are all in AWE!!

That is so cute! I love it!