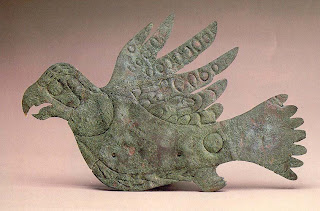 We decided to get out of warm muggy humid Columbus today. Now I got up at 4am & sat working on a project down in the Art Cave until Chris woke up at 6am. Took the dogs for a mini walk, loaded up the Element & went down to Hocking Hills for the day. We stopped in Logan for breakfast searching for someplace to eat besides Bob Evans which we've renamed "Bland Evans", and found this funky diner in downtown Logan called M&M diner. Our waitress was the nicest person & I had delicious corn cakes, but you could definitely tell we were in Southern Ohio. The gal was wearing a skin tight lime color tank top with short short shorts showing off about 4 tattos. Oh, I forgot, she was bulging out of her attire. But I lived in a town along the Ohio River where this was a standard fashion statement...just with bigger hair! Okay, back to the Road trip. We went to Old Man's Caves in Hocking Hills. Lovely drive up & down the back of the ridge. There weren't many people there at the Park when we got there, and it was a quiet hike down to the falls. We both took pictures (haven't looked at mine yet, but need to upload to the computer later). THEN...everyone just arrived with screaming kids, barking dogs, loud obnoxious people. So we left. We decided to head over to Chilicothe Ohio to the Mound City Group. It has probably been over 30 years since Chris & I have been there. What a TREAT! If you are not aware, Ohio has a large number of ancient Indian Mounds. This is part of the Mississippian area where the Adena or Hopewell Indian culture lives, thrived and disappeared during the time of Rome's Caesar. It is called the "Pyramids" of the Eastern United States. Check out the link above to visit the site & check out some other tour of Ohio.

There was a group of Archaeologist there digging into the wall surrounding the grouping of Mounds. One stopped & chatted with us telling us that he was trying to find parts of the original wall to test the soil to see where it came from. We got to get down in the trenches with him and see what he was working on. He told us about all these other sites that were being worked on in the area giving us a deeper appreciation for the beauty & rich heritage of Ohio. Then we went into the Ranger station & checked out the museum. That is where I saw this falcon piece made of copper. I absolutely was floored by the sheer elegance of this artifact. There were also copper horns possibly used in sacred ceremonies, pottery pieces elaborately etched, copper beads, fantastical pipes with one being a beaver with inlaid pearl teeth, and necklaces of shells. In the book store which was small, but had enough to entice us was another Archaeologist who shared with us stories about the first time this site was found by European whites in 1846, and how unfortunately during World War I this site was used for Fort Sherman. I knew there were many other Mounds all through this area, but he was showing us a map of other sites which where plowed under by farmers of the past, and which are hopefully being rescued by the US Park Service.

Once again, I kept looking at the copper falcon. I wanted something with a picture of it. One of the female Rangers was nice enough to show me a booklet with a picture of it which I bought. Then she saw my bracelet (yes i wore my own jewelry for a change) and showed me a book she thought I might like. I chuckled as it was David Dean's book on Native American Beadwork. Why? Because I'd met him at an Ohio Beader's meeting before & have taken classes with him while I was new at beading. I shared with her a story David told about antiquing bead work & she laughed & asked if she could tell other visitors this story. I thought why not...David told me...why not pass it on. But back to the copper falcon. When we got home Chris found the imagine online for me to use for a future project along with one of a bear claw.

And for a history lesson. The ancient Indian culture is called Adena or Hopewell not because anyone knows for sure that is what they are called, but because many of the first Mounds were excavated on the then Governor of Ohio, Thomas Worthington's place called Adena. And other Mounds were found on land owned by a family called Hopewell. I'm intrigued with this as I know absolutely nothing about Ohio history. It was taught in 7th grade & I didn't move to Ohio until I was in the 8th grade. So I think I'm going to be checking out some history books from the library on Ohio history. This really is a pretty interesting place to live. dot
Posted by flyingbeader at 8:47 PM

Interesting post, Dot. Especially since I live right next door. BTW, don't you just love your Element! Mine is Sierra Sunset.

Great post. I love all those sites, too! My husband grew up in the Marietta area - there is a mound in the cemetary there. You should visit the Fort Ancient site in Lebanon, OH. Unfortunately the budget cuts have forced them to be open only on the weekends.

thanks Cathy. I'm going to have to check out the Lebanon mound this Summer or Fall. I think it will be added to a lunch at the Golden Fleece (or is it the Golden Lamb) in downtown Lebanon. I'm going to get a book on Ohio history so I know more about this Land that my family settled when the territory was first opened. Also, I need to look more into my paternal Grandmother's family. We found a paper in my Dad's stuff saying that my Great Grandmother was Cree. Now to figure out how to confirm this as the court house in the county my Dad was born in burned down & he changed his name.