Battle of the Beadsmith 2014

I was quiet for about two months when I was working on my BOTB 14 or Battle of the Beadsmith 2014 challenge piece.  Yes, I said TWO MONTHS!  Of course I was doing other things as I was working on this, but it took up a whole lot of my beading and thinking time.  First off, it was a complete challenge as I skated into the months of February and March drawing up ideas for a beaded doll for the challenge.  Then I read the rules (one should always read the rules before starting to design anything) and realized it was for WEARABLE ART!  My heart almost stopped.  I wrote to Steven and asked if it really had to be wearable art...and yes, he said yes. But in Steven's marvelous way he coaxed me on with suggestions.  I decided to put the beaded sculpture ideas and drawings aside and to focus on jewelry, jewelry, and more jewelry. 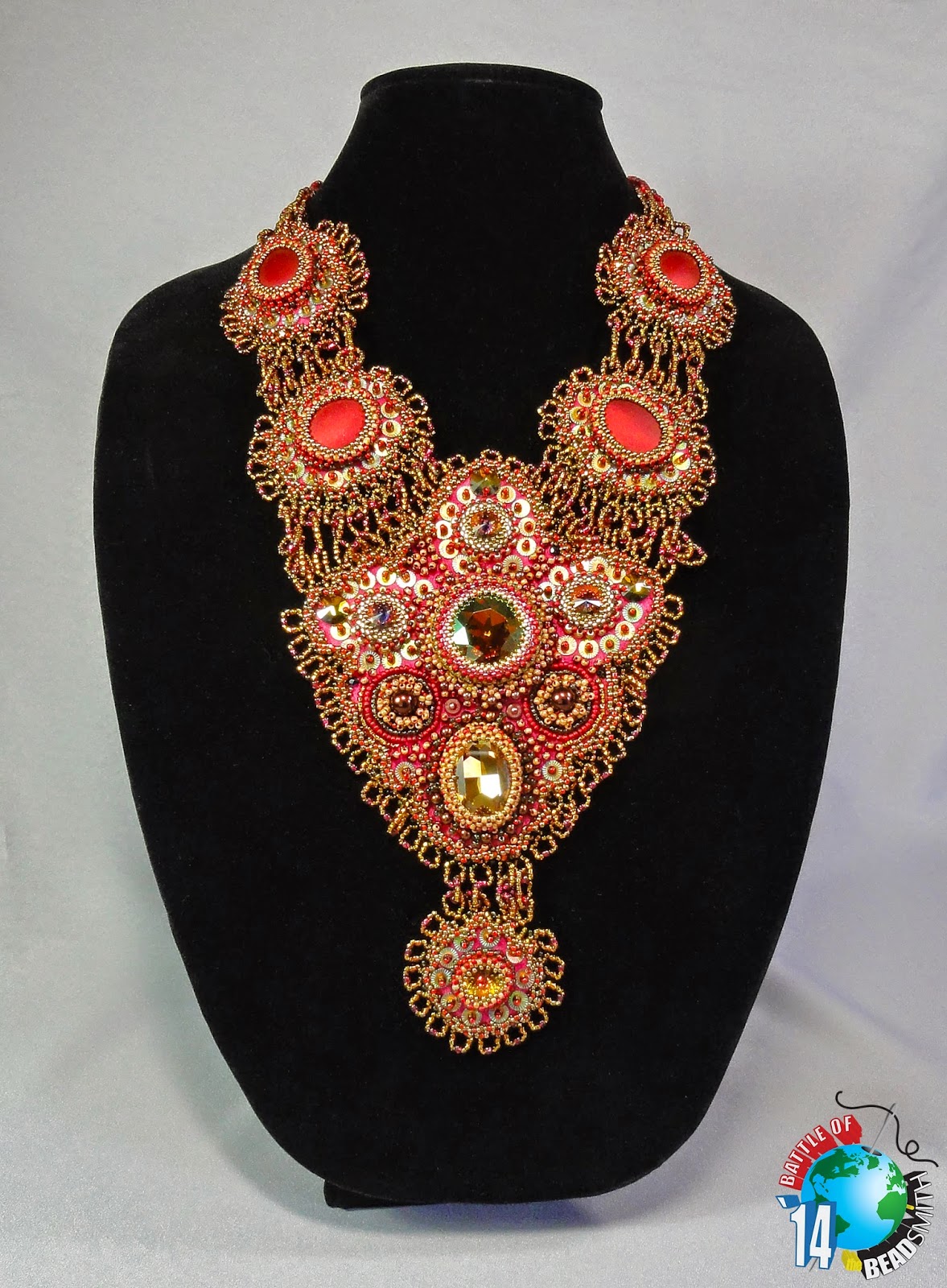 I wanted something that looked heavy without being heavy.  A beaded collar was out of the question as is would not contour to the body's form, so I started to draw component pieces and play puzzle me out.  Then the fun part began.  I went deep down into Dot's Art Cave and found crystals that I'd hoarded away and probably haven't seen the light of day for years.  I then stopped over at the big wall of seed beads and randomly chose colors that would make me happy.  I forgot that I did need some sort of bead backing so without turning on the lights, I pulled out a piece of Nicole's Bead Backing and rushed upstairs.  To my amazement, I had chosen some colors that I've never worked with before and the color of the backing was PINK!  Really?  PINK?  And I chose brown iris, cranberry, brown, red, and bronzes.  The crystals and Rivolis were brown and pink.  Yikes!  I merrily started to bead and to my amazement the colors liked each other and were purring along.  I got the major component with the large crystals completed and I'm talking about edging and backing and all when I realized I did not like it.  That was a whole week of work and I did not like it at all.  So (oh yes I did it) out came the scissors and the first major rip apart began.  I was pondering why didn't I like it.  Then I realized, there was nothing that actually popped out at me.  I tried adding pearls, but it just wasn't enough.  Then I picked up a bag of sequins and opened it up.  A few spilled out and landed on the focal component.  I could not believe that those green sequins were the answer.  So green joined the party and back to beading I went.  I decided to not totally encrust this piece letting the pink backing show as it added more contrast to the crystal and bead colors.  I liked that a whole lot. 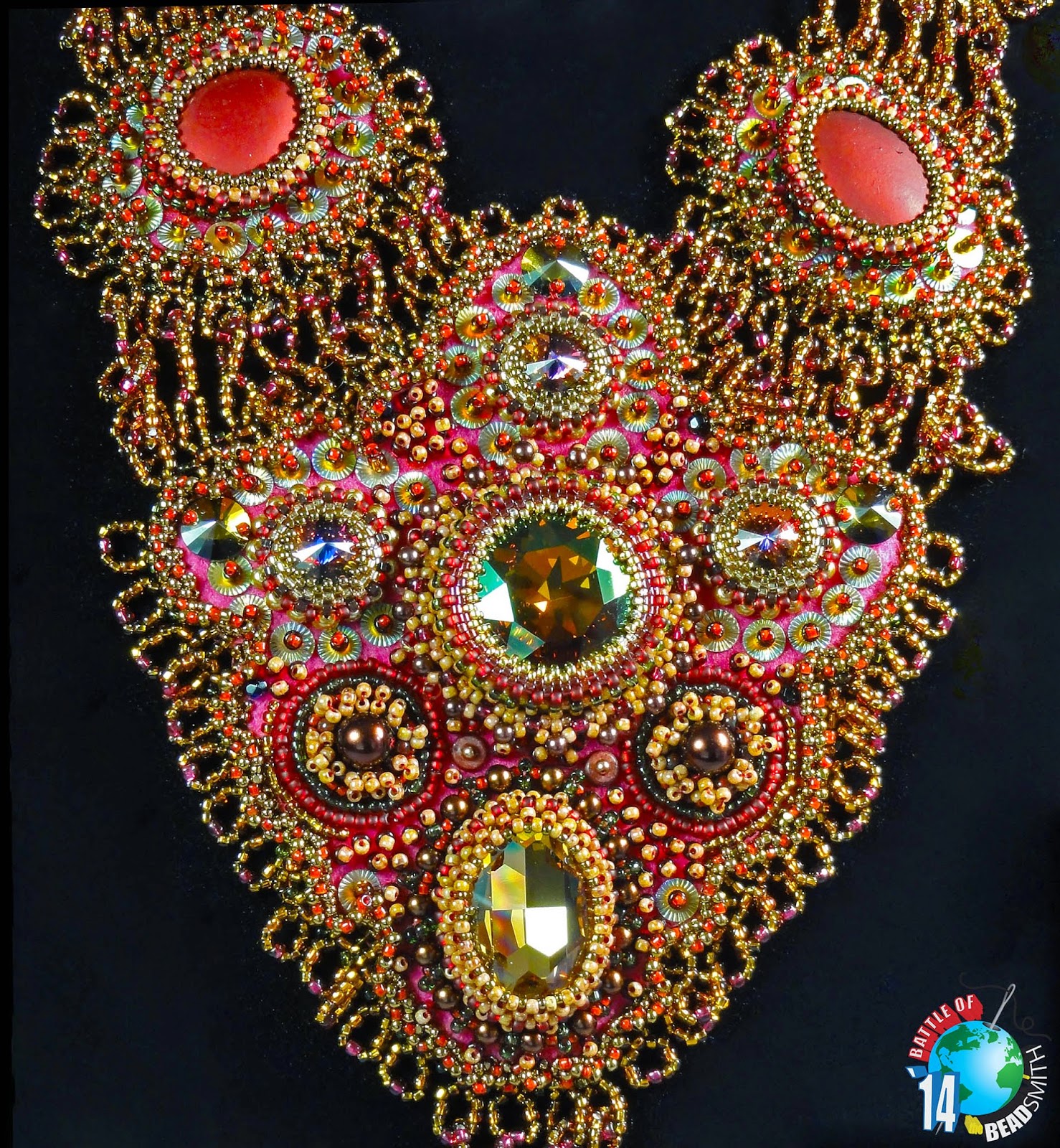 Then I began the edging AGAIN.  I redid the edging twice before I landed on the idea of circles encircling circles using the cranberry and brown.  I sat back and thought about some of the baroque picture frames I'd seen at all the museums I'd been drawn too, so I came up with the name Cranberry Baroque for the piece.  Happily, I began using the circle idea to join the components together.  It was done. Finally, and three weeks before the deadline.  So I took the necklace to my niece Emily's graduation party and had both her and Mallory do a little bit of modeling for me.  Their young innocent beauty worked so well with the beads and crystals.  I was excited.  Then I began looking at the pictures and to my horror realized the length of the necklace strap was too long.  All the components were hanging down past the collar bone instead of hugging it.  What to do? What to do?  So out came the scissors and a shortening and another idea to have two different ways to clasp the piece so that anyone with a smaller or larger neck could wear the necklace so it would caress the collar bone instead hanging. 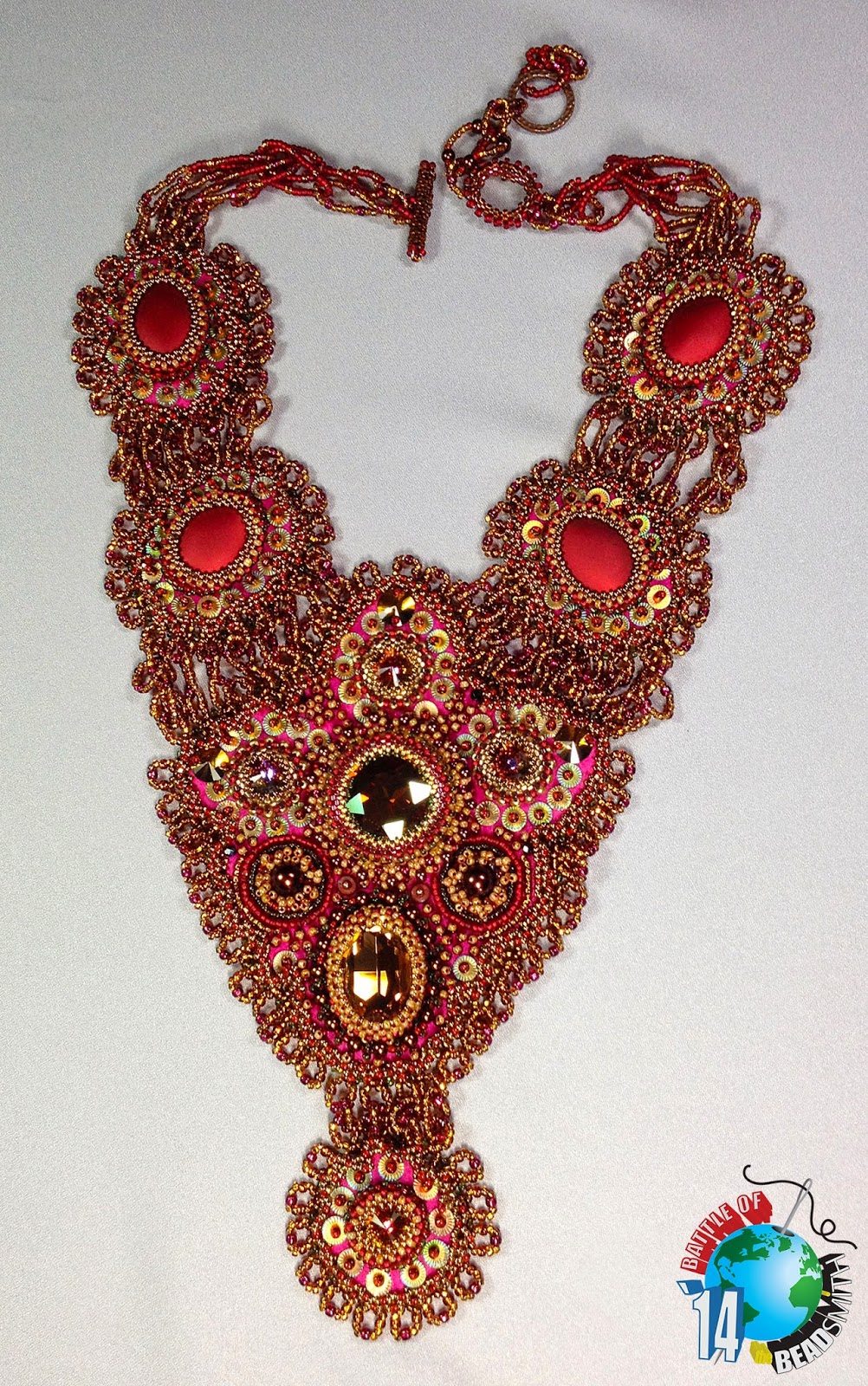 I was indeed happy.  Then the picture taking. Chris and I tried three different cameras, lighting, and backgrounds before only four suitable pictures were usable.  I definitely have learned that we need a better digital camera if I want to do any more competitions, better lighting, and definitely a tent or background screens.  But finally everything was sent off.  Now, I'm a part of the 2014 Battle of the Beadsmiths.  It was fun, and challenging and educational as well.  But the best part is taking time to look at all the other gorgeous pieces of wearable art completed from 256 global  bead artist.  A special thank you for Stephen in organizing this challenge spending countless hours posting pictures, matching Battle participants, and keeping the tone of the Battle amusing and fun. 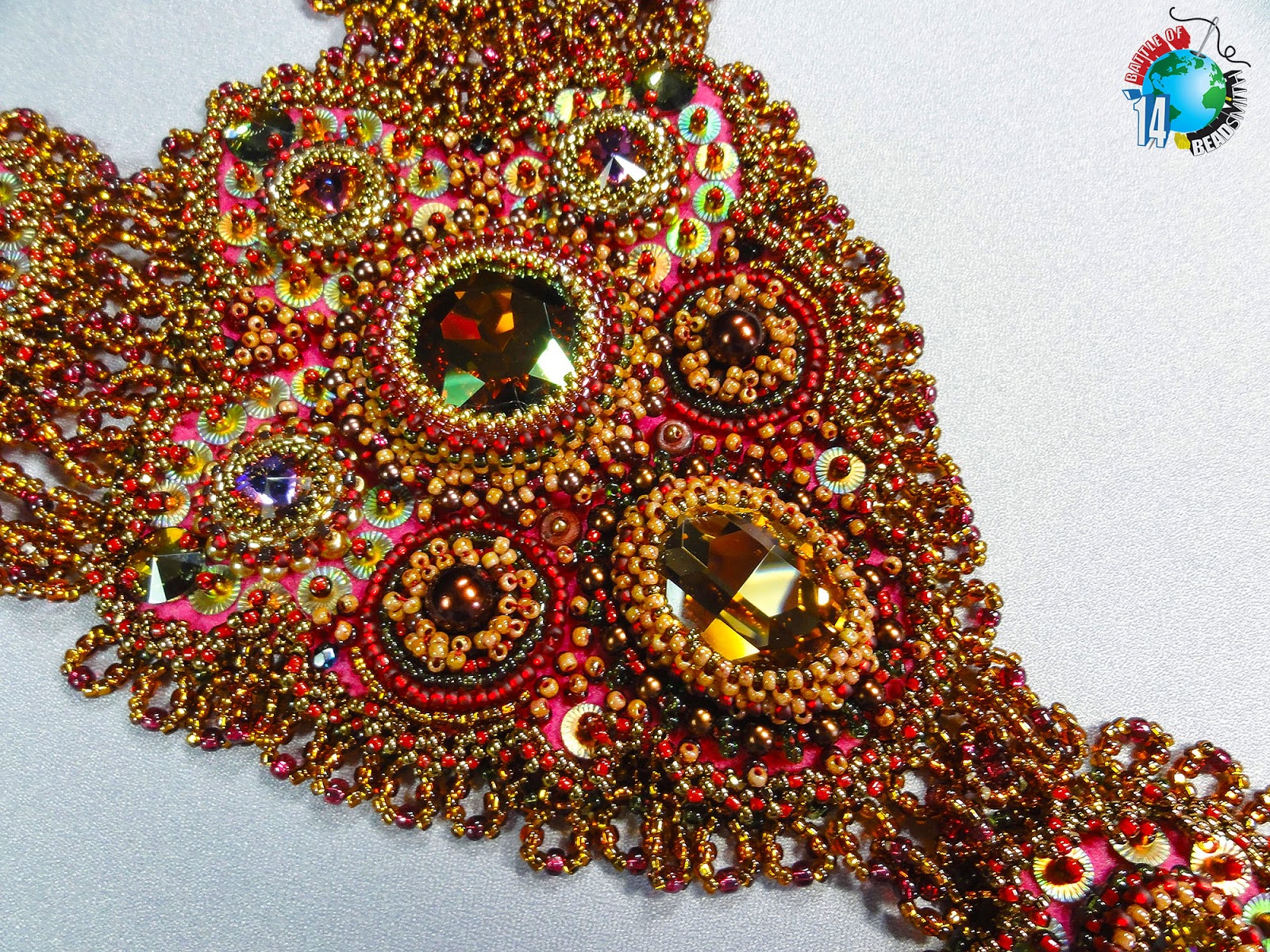 Posted by flyingbeader at 5:42 PM

Well done. This is stunning
Nicole/Beadwright