Earlier this week, I showed you a necklace incorporating herringbone and right angle weave after being inspired by Marcia DeCoster's Beaded Opueance and Mabeline Gidez's I CAN Right Angle Weave.  I was very happy with the outcome and have worn it almost every single day since the creation.  It is light weight, and simple enough for work wear but jazzy enough to wear out for a night on the town. Monday, I decided to pull out another on of Lark Craft books and see what other things could give me an idea and inspire me to push my designing a little bit further.  This time, I was looking at Jill Wiseman's Beautiful Beaded Ropes and came across several very interesting concepts.  In several of her projects, she states that you could make all the pieces of a necklace individually and then put them together but why not find a way embellish one to incorporate another creating something more solid and unique.  Talk about making my brain buzz... 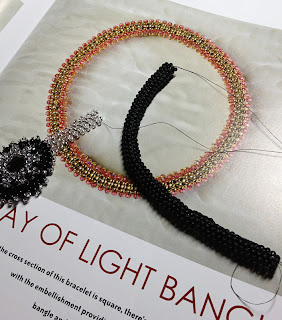 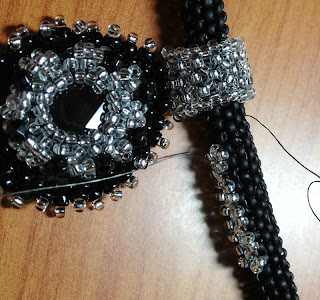 So I started out with a small bead embroidered pendent in all blacks and silver.  I decided to make the bail using right angle weave instead of peyote which is what is normally used.  Then I made a long peyote tube using size 11 black matt beads.  If you've followed me for awhile, you'll know that I'm not a big fan of peyote so this was a little bit of a challenge for me to keep the pattern going in all ONE COLOR!  But it worked, and I was pleased at how it looked.  I could at this point just add the pendent put on a clasp and call it done.  But nope, that would not make my Muse happy.  So I decided to once again call on Marcia's book to give me another idea but I came back to Amphora again as I love the look of the right angle weave beaded bead.  But as suggested in Jill's book, I wanted to make this a part of the peyote chain.  So added a row of size 11 seed beads between the "ditch" in the peyote tube securing it to the peyote chain and used this as the starting place for a RAW tube around the tube.  Then I did only one other layer with the same matt black beads for only one row.  Now I have movement in multiple directions with the roundness of the pendent, the even rows of the peyote and the added depth and complimentary direction of the RAW tube with the embellishments.  I like how it looks so far. 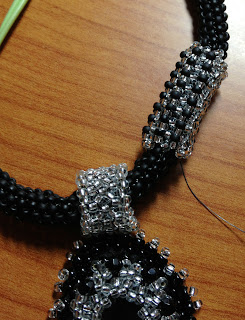 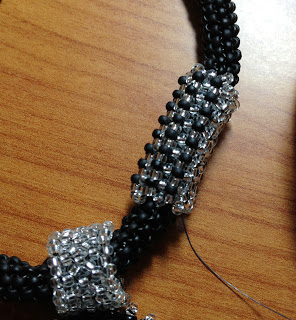 I'm going to add another RAW tube on the other side of the pendent and these two permanent RAW tubes will keep the pendent from sliding all over the place.  But am I done, nope.  My plan is to add at least two more of the RAW tubes farther up the peyote tube.  Stay tune to check out more progress post.
Posted by flyingbeader at 11:15 PM

Loving your bead work. You know way back when you said you were taking a break from doll making, I was like, Why? I don't get it. Now I understand. I am at the edge a deep abyss looking in, as I am feeling the pull to go in other directions creatively. My message from the Universe today was so appropriate. It said " Letting go allows me to let the new things to find me that are meant for me.

Now it is a matter of trust. I think that is part of why Sam showed up now. To help me be fearless.

That's a beautiful way to add visual interest to the rope. Great job!!

It really is stunning! It will be beautiful to wear on a holiday dress or pretty top! I love it!