Now for some Scotties 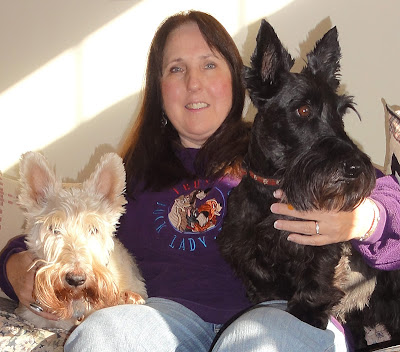 Yesterday was such a beautiful Sunny day in Ohio. Cool outside but the bright Fall Sun collected in the front room bathing the area with soft warming light. Arwen has figured out how to open one of the gates to the room. She uses her nose to push it open and then lets herself in to run about and jump up to people watch out the window. Frodo follows along just to make sure she doesn't do anything too fun. They were having such a good time and the lighting was so perfect, that Chris decided to do some photograph. I even got into the act with a new portrait of me with two of the three. (Fiona was fast asleep in her basket) 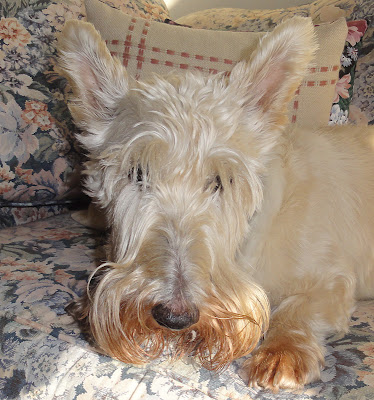 Arwen is our baby Scottie. Though she is over 7 years old, she still is our little clown. Two months ago, we received the awful diagnosis that she has bladder cancer. She had been having lots of accidents so I took her to the Vet. At first he thought she had Cushings and we began the journey to get that diagnosed when she developed a bladder infection. Microscopic findings showed she had transitional cells in her urine. This is the biggest clue of bladder cancer in Scotties who are the number one breed listed to have TCC. Ultrasound a few days later showed that indeed she had a tumor inside her bladder. It was too close to the ureters to be surgically removed. I've had Scotties since 1989 and know that this was not a good diagnosis for our young girl. We decided to treat her with a drug called Piroxicam. Oh yes, we did cry a long time as we know that we'll never get to see Arwen grow old. I contacted some other Scottie owners who have TCC and some told me the expected life span can be up to two years depending on the advancement of the tumor. Almost all of them told me that this drug was what was keeping their dogs alive. Then one of the Vet techs from Worthington Woods animal hospital called and shared her experience with TCC and her dog. As horrible as this all sounded, the support from all these people have made us feel so much better. And almost a full month into her cancer treatment, Arwen is doing better. She has no accidents anymore and her appetite is back. We are just going to love her for as long as she is with us. 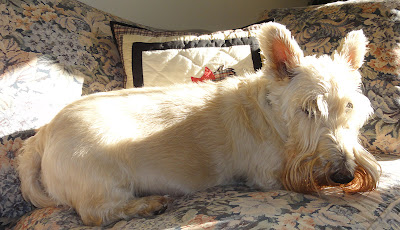 Now this is Frodo. He's our 8+ black brindle Scottie who is one of Fiona's sons. Before Frodo even took one breath, Chris decided that this was HIS BOY! Frodo is the dog that made Chris into a true dog person. Frodo is the dog who ate all the fringe off our carpet when we was a puppy and ate a big hole in the center of an expensive rug. My Vet jokes saying that maybe that is why he's still so skinny. I think it is because of all the wood he eats. Oh yes, he loves to eat the fence. At one time when he was about two, he chewed a hole in our wooden fence just wide enough to stick his head out of so he could bark at all the rabbits in the field. Oh he not only chews the wooden fence, but he also likes to grab hold of the chain link fence and pull on it whenever another dog walks down the sidewalk. 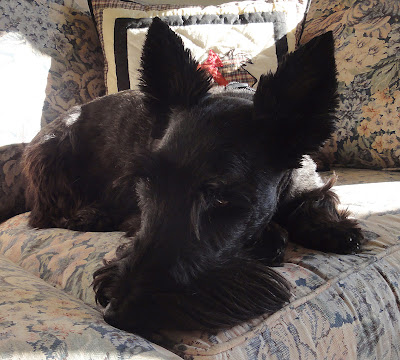 Doesn't he look all innocent here? But all the chewing and pulling on the fence caught up with him, and about 18 months ago when he went in for teeth cleaning he came home with 16 less teeth. 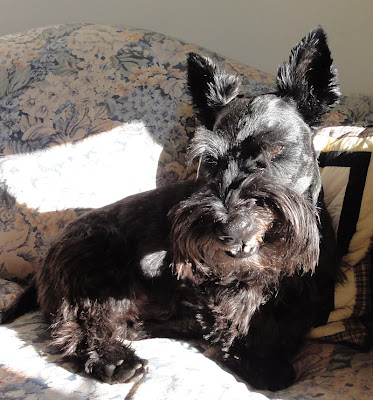 If you don't believe me, then here is the proof. He's still got enough teeth to still pull on the chain link fence, but I'm sure he'll probably lose them too & be a toothless old man. He's on a special diet too. He eats canned food mixed with kibble. So far that is his only health problem. Since his mother, Fiona, has Diabetes, we watch him to make sure he doesn't develop this either. Nothing like living in a house with Senior dogs, but I wouldn't have it any other way as I love these guys so much. 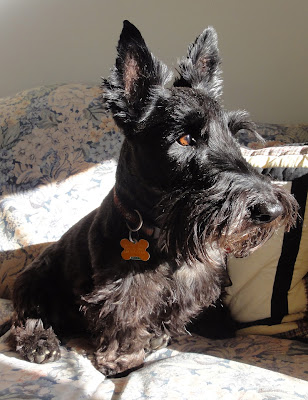 Frodo is always on the alert. He is one charming old guy and just a picture perfect Scottie as long as he keeps his mouth shut. 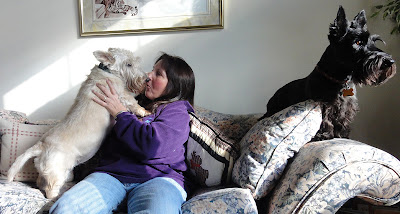 We love our Scotties so much. They take up a lot of our lives now that the girls are ill. Fiona wakes us up to eat and get her insulin. Arwen needs her pills, and Frodo just wants a little time in the chair with Dad in the mornings. They keep us grounded, and they fill our lives with unconditional love. What more could we ask for?
Posted by flyingbeader at 8:13 AM

Gosh, I know how you feel. We lost two of our babies last year and have one sickie left. Our vet is wonderful. She gave us Jack for a year longer than I thought we would have him. Junior is still here, though this time last year we thought he would not make it.

When you have a great dog doctor, its one of the most wonderful gifts the Universe can give.

You have one beautiful family. I am very allergic to animals so I've never been able to have a dog. I Imagine it's one of the greatest joys in life....