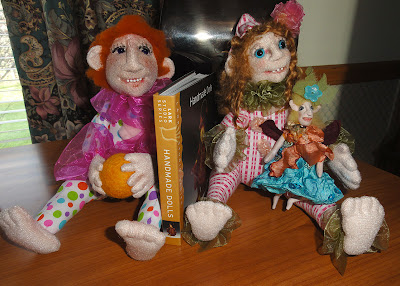 I tell you...trying to learn to make your own patterns is HARD!!!!! I don't think I've ever had such a difficult time as trying to draw out patterns, then sew them up & then tweak, tweak, tweak. Along the way, I've been studying how other doll makers make theirs look so easy. Now I know there is nothing easy about this at all. So I'm showing you these my two newest dolls called Bedtime twins. I did a boy & a girl mainly because I just wanted to try to understand what works and what definitely doesn't. 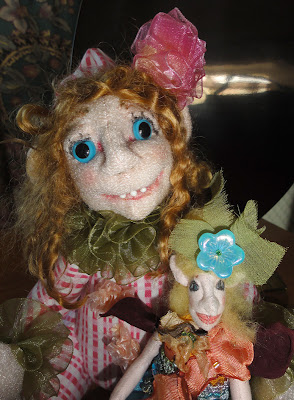 This is the girl twin who I did second. The very first thing that struck me when I finished her was those eyes! I made the mistake of picking 9mm eyes which for this pattern are definitely too big. I wanted bigger eyes because I think they are more appealing in a younger dolls, but these are too much! I'm going to try to tweak this doll a little more by possibly applying a lower lid to take away all that creepy look. 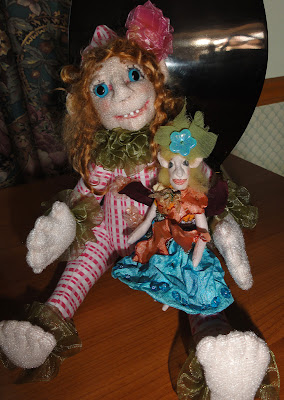 Since I did this doll second, I tried doing a mitten hand with a little hint of fingers. Then I needle sculpted the fingers. I actually got this idea from some of Ute Vasnia's patterns. I like the look and the toes are just too adorable. I learned that technique from Lucy Landry's Wild Things dolls. I had fun with the ribbon roushing that I learned from Cyndy Sieving. 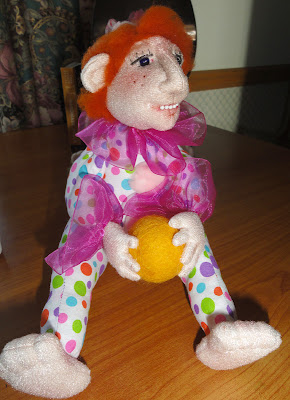 I do like the male doll, but think I gave him too big of a nose. Possibly next time I can reduce the needle sculpting of the news & give him a little button nose. I like his hands, but they were tough to turn with the crafting fabric for dolls that I bought from Doll Maker's Journey. 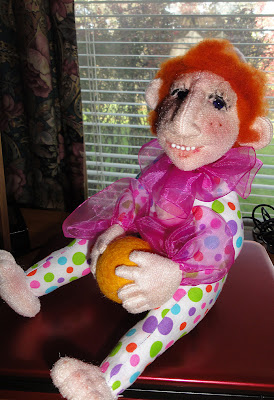 I don't think any other doll makers need to worry about me taking over their spots as designers...this is really rough. I think it is going to take me years to figure this all out. Meanwhile, I guess I need to learn to sew a little better. Maybe learn how to do DARTS! Oh well, this is all fun & I am going to have a house full of wee little dolls soon.
Posted by flyingbeader at 6:46 PM

I think your dolls are great! If anyone can master this process, its you.

They are fab. And I can relate to your agonies. Pattern drafting is really hard work, but you've done a waonderful job!