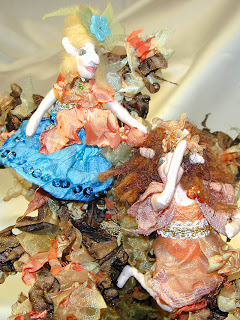 I'm currently taking two classes from Doll Street. The one class I've been up to date with & have actually been successful in finishing the class assignments as they are presented. For this week which is the 5th week for The Enchanted Tree, we were to cloth/dress the two fairy dolls, Iris & Erin. I followed some of the instructions & managed to dress both of my dolls with some of the scrap materials I've been saving for about a year. (Yes, more recycled!). I mainly used polyester fabrics so when I cut them, I used the technique Michelle taught us to use a flame to actually melt the edges so they don't ravel. I also liked how the material would pucker & look like it had a petticoat underneath. I still don't care for the faces I painted on these wee dolls...and let me tell you....THEY ARE SMALL!!!! Erin is about 4 inches & Iris is 6 inches. I was successful is sewing them both out AND turning the arms and legs without blow outs. It was a first for me with something so small. I didn't even use glue around the seams which Judy S. taught me. So I feel that either my sewing is getting better, or I'm learning how to be a little more gentle while using my hemostats in turning small appendages. I'll never get to the point where I can turn tiny bitty fingers like Cyndy S. does, but who knows. Maybe if I practice & don't go blind with all the beading I'm doing, I'll be able to even sew tiny fingers & turn them successfully some day.

I feel kinda bad about the other class I'm taking. It is the Embellisher class & I've only done the first 3 weeks of assignments. For some reason, I just don't seem to want to get the machine out & work with it. I did break down & went to Westerville Sew & Save to get a new attachment for the felter machine so when I break more needles I don't have to buy a whole other cartridge, but can just replace the needles as needed. I was thinking of taking the felter with me to the Retreat this weekend, but think the other Lilies would be mad at me. So this week, I'm going to put my beads away & spend a couple hours trying to catch up on my class. What made me think of this? Well, on Doll Street, teachers were talking about how some times while teaching an online class they do not get feedback from students as the classes are progressing on. Some of them said that they don't feel that they might not be getting through to people who aren't posting. Made me think about the classes I've taken online. One of them, I didn't even join the Yahoo Group & only download the class assignments. MOF, I still haven't even started that class. I guess I wanted it for future time when I'm skilled enough to do that class. With the other class, I felt intimidated & didn't even share anything, but read the comments. I did learn from them, but I was too afraid of the rejections I would get from showing my poor work. Oh, I lost that fear real fast. Now I figure if anyone can learn from my foolish mistakes besides myself, I'm going to share. But I have learned that I should only take one class at a time. I do not have the time to fully work with the assignments along with current beading projects & then that awful thing called THE JOB! So I'm going to limited myself on my online classes since I've realized something valuable about myself...I'm not a super girl & can't do everything I want to at the same time. Think we all should realize this. dot
Posted by flyingbeader at 5:01 PM

Hi there. I think I found your blog from dsjournal emails... I like the dolls you're making now & it's good to hear that you notice your skills improving. Taking one class at a time is a great idea!
Did you ever try a straw for turning tiny fingers? Like a coffee stirrer? That, sewing on the bias and wetting the fabric before turning always worked for me, even with the tiniest fingers. (or you can get something like this - http://www.joggles.com/store/catalog/product_info.php?cPath=21_63&products_id=3961 I'm not affiliated, it's just handy!)

Good point about overextending ourselves, Dot. I, too, have a tendency to do that. Even being retired doesn't give you more than 24 hours in a day. Better to do fewer things well.
Your dolls are precious, by the way.
Arline

Thanks for sharing about your classes. It really is challenging to work on such a small scale. I love your fairies. Sounds like you are learning some great new techniques!