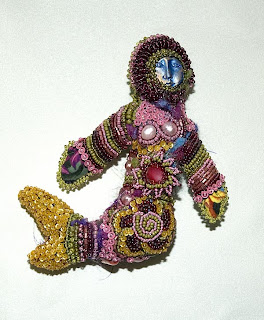 First off, I want to apologize for not posting in over a month. I have been working on art projects all this time, but just haven't had the initiative to publish them. Back in July or August, someone told me that I was bragging too much about my accomplishments, and it made me a bit depressed. I backed away, and kept relatively quiet. But, I have commitments and need to publish them. This is the first for the new Bead Journal Project for 2008-2009. The committee decided that this year, we'd all start in September.

It was hard for me to come up with a big game plan for the year. I'd just finished a couple dolls for Global Warming and had read Rachel Carson's Silent Spring. I wanted to do a big gigantic piece dedicated to Rachel, but I tried drawing, and thinking, and doodling, and nothing came to surface. Then I decided that instead of doing one big project dedicated to Saving our Earth, I'd do 12 small ones each month, and if I still had the energy I'd work on the bigger piece through the year. So my BJP project for 2008-2009 all revolves around recycling. Each month, I'm either going to work with something already in my stash, a doll that I have bought but really didn't like too much, or my favorite theme "Trash to Treasure" which is a piece bought at the thrift store which is probably ready to be thrown in the trash and taken to the landfill but I've "rescued" and turned into a piece of Treasure.

This month begins with something from my stash. I made over 40 doll forms for kits to sell when I went to EDAC in July. I came back home with 1/2 and from that, I sold half of those. So I decided to take one of my own design forms and bead it. Since I suffered so much from allergies in September, it was like I was swim all the time with my eyes and nose watering. So I decided to bead a mermaid. I used a clay face that Chris had made for me and incorporated fiber with the beads and sequins. I even came up with a new method to do hair. Therefore-Flora Swims.
Posted by flyingbeader at 7:36 PM

Sounds like your friend may have felt a touch of envy...Sorry to hear how it effected you! You are so talented and obviously dedicated to your creative work. Don't let anyone silence you. Sail ahead! I think that we need to remind each other of this so that our inner critics in particular don't gain an upper hand!

I was in shock to hear that anyone would dare to say you brag about your accomplishments. And then your reaction is proof that each one of us, no matter how talented, has self doubt. I have no words to tell you how wonderful I have always felt your work is. You are one of the artists whose work I study to become more accomplished. Go your way, and don't worry about how much you talk about your talent. You own it!

Don't ever let others bring you down. Your works are always wonderful and I find great inspiration in your work. So please please brag.

HOORAY! Dot - you have always come across (to me anyway) as oh so humble, but happy about your accomplishments. It's sad to know that some folks (artists at that for gods sake!) would even insinuate such a thing. That evil inner critic is hard enough to deal with, I imagine it would be crushing to have artistic peers go 'there'.

You SHOULD be shouting from the rooftops, your accomplishments are inspiring! Screw the naysayers. Ack, I guess it touched a nerve in me, I'll shut up now.

"Let neither praise, nor critisism disturb your soul. We are what we are in God's eyes, nothing more, nothing less."

In other words, ignore the jealous witch. If you don't value your art, no one else will.

Flora is merma-licious! I love the idea of using what you have and/or reusing other items. Can't wait to see more in 2009!

Welcome back, Dot!!!! What would the BJP and doll worlds be like without your enthusiasm and beautiful work to inspire us???? Dreary... that's what! We need you and appreciate your contributions more than you may know!

I wrote a short comment about the issues we sometimes have around success in response to your post on the BJP.

I can't believe someone would say anything about you bragging to much... come one! How else are we know how well you are doing unless you let us know... think they must just be a bit jelous! I say don't stop letting us know! and inspiring us...