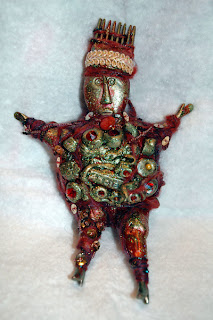 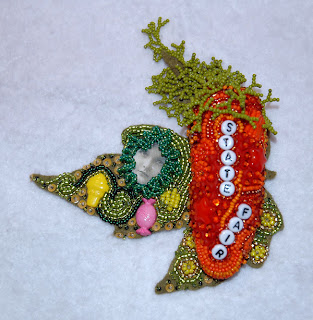 We are one week into September & my how time just flies. I have managed to get a picture of my August Bead Journal Project done. Was I so wrong when I said that Ohio State Fair was in July...wrong! That as the Franklin County Fair I was musing on. No, The Ohio State Fair is in AUGUST! I spent a whole day sitting at the Arts & Crafts building doing demos on beaded art dolls. Most people were so overwhelmed that I actually sew the beads on instead of just gluing them down. GLUE! NEVER!!!!!! So in tribute to State Fair month, my journal leaf has candy & ice cream buttons that I found in an antique store, a face of a child which is who loved to come to our booth & handle all the dolls we had on display, and naturally the Bounty of Nature. I'm a big orange/carrot kind of person so I beaded an award winning carrot for the Fair. Blue Ribbon winner...well, not really, but still I like it a lot.


Also I've been so involved in recycling for art that I also included a picture of an Ornie that I did for Yahoo's Group ArtDollz. She is the arms & legs of a Dollar Store jester doll, the body is an Advair disc, and the head dress is that of those weird combs you get in a package of hair dye.
Posted by flyingbeader at 7:00 PM

Dot, I love your bead work!! these two pieces put a smile on my face! How cool to hear the reaction about "NO GLUE" I don't use glue often either. I will admit ONE face for Carol's swap I used glue on just because the booger kept jumping around!! But only enough to tack it down to sit still LOL

Okay! I have to admit that I DO USE GLUE, but only to keep the bigger beads in place. But I actually had folks ask if I glued the beads down only. Yeppers, I almost passed out!

I'm still a newbie at artdollz and have not yet made anything but I am soooo inspired by your ornie. Good luck in the ornie competition.

That Ornie doll is terrific -- I can imagine the astonishment of folks watching you work. People just don't realize what goes into making these wonderful objects.

dot... of course your beaded project is awesome once again!n I really love your art doll that you did.... never would have guessed what the parts are... Can't wait to see your post on MMM and what magic you did!
sammy

Gotta laugh! Glue! Like that is gonna work!
Love the flying carrot!
Give Fro and Ar a hug for me, and have fun playing today.

Hello Dot: You have been MEME Thingy. Hugs Judy