Round two for Steven's Battle of the Beadsmith is starting.  I'm enjoying seeing new photos of each piece that has moved up.  It made me thing more about things I should have/could have done in the competition. First and foremost, I want to emphasis that this was a friendly competition with no prizes.  The biggest prize to all 200+ artist was a chance to have the whole world view their designing and artistic skills.  With that I'm so happy.  And for me one of biggest winning prizes was meeting other designers and adding them to my "friends" list on Facebook.  One night I actually spent hours texting with another designer who didn't make it to round two like myself.  We connected and learned more about each other deciding hey we had more in common than beads and I was delighted when I saw she sent me a friend's request so know I can follow her Timeline and be a part of her life. One thing I told her was that her piece was a winner!  It was just luck of the draw that she had been paired with another piece of work just as stunning, just as creative, just as much a winner.  I strongly encouraged her to wear it out into the public and let the world beyond these small windows see what she'd created and admire it in all its glory.  I can't tell you how thrilling it is to have a person come over gushing all over your creation.  I myself wore Cranberry Baroque to Worthington Mall and had five strangers come up to me wanting to see my necklace.  All three asked for my card and one even directed me a gallery that would love to show my jewelry.  In the real world, you don't have to use photographs or words to explain what you have done.  It is right there in three dimension doing all the work for you.  Don't let the word "loser" even work into your mind!  It will destroy confidence and put a big brake on your creativity.  Show your work online, but also wear it and let it blaze a path. 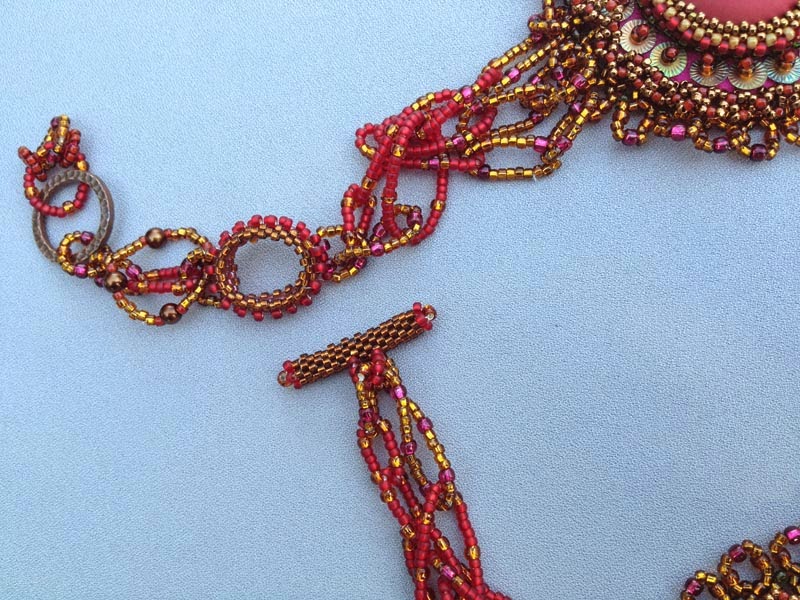 So another things I did learn from BOTB is that I need to really concentrate on WORDS.  I know, above I just wrote that sometime they shouldn't be so crucial, but in competitions where your words can be the door to get people to actually look at what you've so created choosing the right phrases and focusing on your creative process is just as important as having the right camera or backdrops.  One of the things I didn't focus on with Cranberry Baroque was stating that I intentionally left the fabric showing as the pink of the fabric was the backdrop for the other colors making them all pop out.  I also should have used a fabric that was more intricate with patterns that would enhance the bead work.  Once again should have/could have, but I did learn that creativity and words need to ride a competition entry hand and hand when the judges can't see the work in real time.

Posted by flyingbeader at 5:11 PM

Dot I loved your post and you are so right. I couldn't bring myself to wear mine in public yet, but my cousin is going to wear it at a fair. So that is a step in the right direction. You are an amazing woman. Thanks again.
Teressa Dyer