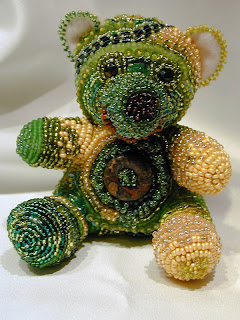 I'm slowly recovering from my sinus surgery on Monday. It wasn't as bad as I thought, but recovering is going kind of slow. Right now, I feel like I'm having a sinus infection what with all the pressure in my head and the sinus pain under my eyes. I tried to go out today for breakfast & boy was that a mistake. Had to hurry home. I'm NOT ready for the public yet. One thing that I was worried about with having this surgery was if I'd be able to sit at my work station and do some beading. Have I EVER! As long as I keep my head still, I can work away the hours. Which is a good thing considering that television makes me a little nauseous still. So I've been creating new projects, sewing, and naturally beading.

This is my March entry for the BJP 2008-2009. His name is Shawnee. The beading & color manipulation on this one isn't as good as I wanted, but I wanted to do a beanie totally encrusted. Shawnee first started as one of the bears from my recycle project. He was sitting there all bright & naked next to his friends. I'd just finished reading a post by Jeannette Shannigan which really touched my heart. Jeannette is blogging about grief from the death of both her husband and son. Every word she writes is filled with raw emotion that makes the reader want to reach out & give her support for this journey she is documenting. I thought about my Dad. He passed away from complications due to lung cancer back in 1991. He was only 61 years old and had only taken medical retirement two weeks before he died. To this day, I miss him so much. I have a picture of he & I when I was 3 years old in my bedroom. I see him every morning when I go to sleep and every night when I change clothes to go to work. I have one of his hats (Daddy had a bald spot & liked to cover it up), and sometimes get it out. But of all the things I have of his that give me peace is memories. He & I became closer toward the end as he still was too proud to quit working though he could. He worked 3rd shift with me at the hospital, and got too weak to drive downtown every night, so he'd come here & we'd car pool together. We shared so much in that time in the car. He told me things that I never knew & he also told me things I probably shouldn't have known. I look in the mirror every day & I see his face. I look like him so much as does my younger brother, Victor. So he also has a real physical reality to me every single day. I think you never truly get over the lose of your parent. I know I can't. I don't think about his death so much after all these years, but I do remember funny silly things about Daddy that make me laugh.

So back to Shawnee. I was thinking about Jeannette's post & looked down at the beads I had on my work table. They were greens with some yellows that I'd been playing with. Then I felt my eyes glaze over & suddenly I was back at home watching Daddy eat his breakfast. Daddy ate the same thing every single day except on Sundays. He had a big bowl of Wheat Chex with at least 3 tablespoons of sugar and enough milk to fill the bowl to the rim. The bowl is what I focused on. He had HIS BOWL! and nobody ate out of Daddy's corn bowl. It was a yellow and green bowl that looked like an ear of corn. It had come from a set of popcorn dishes that my Mother got from Brother Mendenhal for a wedding present. It had 4 bowls, a salt shaker, and a wee little pot for the melted butter. I believe it was either Shawnee or McCoy pottery, but I'm thinking it was Shawnee. Other bowls weren't big enough for Daddy's breakfast (oh he also ate ice cream sundies from this bowl too & could he fill it up with pineapple toppings), so Daddy picked this last Shawnee corn bowl for his. I remember having to wash it afterwards & there in the bottom was a crust of that huge amount of sugar he added to everything. Daddy loved his sugar. He is the only person I've ever seen who could sit down at one sitting and eat an entire apple pie (the WHOLE THING) with a couple scoops of ice cream. Funny thing is that he was very fit and trim. I never saw an extra ounce of fat on that man ever. Next thing I knew, I picked up the bear & started to beaded the greens and yellows on him. Some places is looks like the kernels of corn, in other it looks like the green of the shucks which were at the bottom of the bowl. But each bead was for Daddy. After I finished Shawnee, I called & told my Mom about this project. She laughed & told me she had forgotten all about Daddy's Corn bowl, but that made her remember it. She told me she still had the salt shaker and pot. She told me they'll be mine someday. So, Shawnee made both my Mother & myself share one more thing of Daddy that day. And Shawnee will make me remember my Daddy & his Wheat Chex.
Posted by flyingbeader at 5:51 PM

Great post! I called my father Daddy also. I have these kinds of fond memories of my father also. Thanks for sharing some of your memories of your Daddy. I love your bear.

Such a wonderful story to go along with this darling, darling bear, Dot!

Hope you start feeling better very soon -- and whatever you do, don't stop beading these critters . . .

I do hope you recover quickly from your sinus surgery.

What a sweet memory of your Dad. It must have been all of that sugar. ;)

Love the bear and loved the story behind it. Isn't it amazing how beading brings out the emotions and helps deal with them.Having sustained losses in my life, as we all have, I have so much respect and admiration for Jeannette. Reading your post brought back some wonderful memories of my Daddy. Thanks,
Arline

I just read this and the previous post.... lots to digest here... I love all the details you wrote about your memories of your precious Daddy and your new Shawnee made in his honor. Your beaded beanie bear is wonderful, even without his story! Please keep up posted how you're doing after the surgery. Although I'm sorry you had to go through that and completely understand your feeling going into it, the quick scheduling of it may have saved you a lot of angst. Hope it is a total success. Hugs, Robin A.

Shawnee is stunning, Dot, and the reason behind him is very touching.

Funny, when I saw he was Shawnee, I immediately thought of Girl Scouts, especially with the colors. That's the name of our local GS council.

Your bear is adorable, your story is heartfilled. I also called my father - daddy. Maybe one day, I'll do a tribute as nice as yours for my daddy. I hope you're feeling better real soon -

THank you so much everyone. I love remembering my Daddy. He was fun, and had such a wicked sense of humor. I got that from him. Oh & his high check bones & "spoon" teeth.

First... so glad to see you posting after your surgery and to hear you are on the mend.

That bear is awesome, I love the colors. You memories of your dad are so sweet, I enjoyed reading about them - you really brought a bit of him to life.

Shawnee is so cute and cuddly, and it has such a lovely story to it. Thank you for the picture as well as the story.

Your bear is cute, Dot. Once you are healed from the Sinus surgery, you will wonder why you didn't have it earlier. The worst is the feeling of fullness while waiting for the packing to come out. Hope this finds you on the mend even more.
By the way, I put pictures of the dolls I have done this year in one blog post. Thought you might like to see them, since you started me on them.
Jeanne
http://gammiebrat.blogspot.com/

A lovely bear for a lovely memory. Your dolls are so wonderful. Thank you for sharing!

Those memories are precious and your little bear is just adorable,Dot!
I've been thinking about you lately, as I'm working on one of those Beanie bears you got for me some years ago. :-)
Cheers,
Saby

Adorable Shawnee! thank you for sharing your story... and I hope you are feeling MUCH better now with your sinuses/face/nose!
Love your bra dolls!

I love your story & Shawnee! He is adorable!!! My dad died from lung cancer just a couple years back & I miss him tons! So I was really touched by your tribute. Keep those little critters coming! They are beautiful!
Warmest aloha,
CC

What a wonderful, nostalgic, touching story! Your bear looks great too.